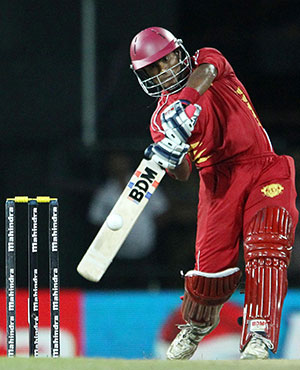 A few years ago, Cricinfo featured an article on a two-day international sixes tournament in 1994 organised by a company called Cricket Legends. Actually "organised" is stretching it a bit. The players were unpaid, the stands were empty, the second day never took place and the only thing legendary about the company was its incompetence. It was a mess of biblical proportions with massive losses being suffered by stadium authorities, the TV company and indeed Cricket Legends.

One week into the SLPL, I had the horrible feeling this was going to be Sri Lanka’s answer to that tournament. It was postponed last year thanks to the Board of Control for Cricket in India’s (BCCI) refusal to send their players, and Murphy’s Law was in full effect from the second India backed out again this year. Chris Gayle, the biggest T20 draw-card pulled out, Kumar Sangakkara got injured and Brad Hodge, the most prolific T20 batsman ever, went home halfway through the tournament. The only thing that lent it any star quality were the current international cricketers from Pakistan and Sri Lanka. That is unless you consider watching a collection of has-beens from Pakistan and the hopefully-will-bes from Australia as blockbuster entertainment.

Aside from the players, the stands were quarter full, the games rarely went down to the wire and the rain was an ever present threat until it had the last laugh in the semis and final. Add to that the rumours of match-fixing, the track record of Sri Lanka Cricket (SLC), the previously unheard of company that organised it and the bad press generated locally; the tournament should have been an unmitigated disaster. If the SLPL was a TV show, it would have been cancelled mid-season.

But it wasn’t a disaster. Admittedly, there were teething problems and the organising left much to be desired. But let’s give the devil its due. For what is arguably the worst run cricket board in the Test world, the SLC actually pulled it off, with lucrative sponsorships and franchise ownerships, although a lot of it had to do with the power of the Sri Lankan brand of cricket and the world class players that have emerged from the island. After all, it is difficult to imagine financial backing of this scale for the Bangladesh Premier League, even if Lalit Modi was organising it.

The SLPL has introduced young Sri Lankan talent to the world, and in the case of Akila Dhananjaya, even to local audiences. Plucked from obscurity based purely on raw talent and a hunch – there’s a lot of Ajantha Mendis in him – but with the addition of athleticism and spin. I like his confidence and craftiness, and sincerely hope he doesn’t get figured out anytime soon.

Special mention must be made of Dilshan Munaweera. Sri Lanka hasn’t had a genuine batsman with the ability to hit effortless sixes after Aravinda de Silva and Sanath Jayasuriya. And for all his improvement, Thisara Perera is still a bowling all rounder in my book. If the SLPL is anything to go by, Munaweera has the potential to fill that void in the short term. But, then again, back in 2006 I said the same thing about Chamara Kapugedera.

When matches are held in different provinces starting next year the crowds will improve, loyalties will build and it will actually become the Sri Lankan Premier League – not the Colombo Premier League. I read somewhere that Gayle has signed a three year contract, so unless he conveniently gets injured just before the tournament, the SLPL 2013 will have some serious star power.

As for SLC, maybe this is its shot at redemption for 2011; a year scarred by financial mismanagement and the oppression of players. And let’s face it, if Sri Lanka goes on to win the World T20, a lot of it would have to do with the competitive practice they got in August.

The SLPL is a noble concept, in spite of being a wannabe IPL, and could greatly benefit Sri Lanka in the long term. Still a baby, it’s trying to run when it can barely crawl, but has ambition. With a bit of luck, next year it might walk. As long as it doesn’t walk in the rainy season, we can shed the negativity and give it a chance to try, can’t we?