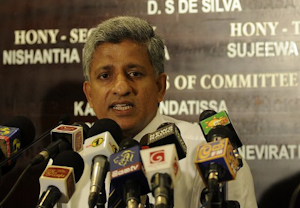 At least for those of us who are not privy to insider information, it is unclear as to what exactly will be accomplished or changed by SLC not recognising player agents. The concept of agents might be reasonably new to sports in Sri Lanka, however, professional athletes in sports such as basketball, soccer, rugby, hockey and American football to name a few, have been represented by sports agents for many years. Player agents to professional sports is as common as accountants to businesses, in other countries.

Just as a recent article published in The Island titled "Fear cricket agents like the plague!” points out, there are many who accuse agents as having put SLC on a slippery slope. The Island article blames agents, at least in part, for Arjuna Ranatunga’s troubles as chairman of SLC, unfair treatment of certain players, having special privileges, influencing players and access to Sri Lankan cricketers in a way that harms the sport. But we should not forget that it is ultimately the sports minister who terminated the great Arjuna Ranatunga’s term as chairman, it is the selection committee appointed by the minister that decides who plays and who does not, it is the sports minister-approved administrators who bend rules to allow certain agents to have special privileges. Within SLC, where the most important decisions are made by either the sports minister or those who are directly answerable to him, to say that player-agent mafia rules, is to imply that those who make the most important decisions have been ‘bought’ by the mafia. Therefore, in my humble opinion, it is those who have been influenced by the powerful players and their agents who should be blamed for putting SLC on a slippery slope.

While I believe that it is a lame excuse to put most of the blame on agents, I do believe that players and their agents have stretched to the limit the boundaries of SLC, which seems to be governed by a rather weak set of rules, regulations and ethics. When there are loopholes within the legal system that are exploited by smart attorneys to win cases for their clients, we don’t call for banning the attorney, do we? Rather, we expect the lawmakers to address those loopholes. Similarly, what SLC needs is to put in place a framework that is built around a solid set of rules, regulations and ethics that serves the best interest of cricket in Sri Lanka. In my opinion, an agent of a nationally contracted player should be subjected to a licensing or certification process, whereby SLC can hold them responsible to adhere to a set of strict rules, regulations and code of conduct that eliminates any conflict of interest. Only those agents licensed or certified by SLC should be allowed to act as agents. For example, certification or licensing requirements might include rules, regulations and ethics along these lines:

• Earn no more than X percent of player salaries from SLC

• Not in any way negatively influence a player’s commitment and honour to his SLC contract, team, captain, team players and the management

• Not have any direct or indirect involvement in a player’s dealings with SLC, which includes refraining from stating any opinion on the client’s cricket, medical or personal matters that might influence their obligations to SLC

It should also be noted that current player contracts also need refinement to ensure total player commitment to SLC. Just as we have the right to pick and choose our employers, the players too should have the right to decide on what is best for them, which might mean focusing on the more lucrative path of being a professional cricketer and not playing for the country. What is important from SLC’s point of view is to realise that professional cricket, professional cricketers and their agents are here to stay and that the days when players played the game simply for the love of it is a thing of the past. The greatest challenge for SLC however is to find the balance between making sure that the best interest of Sri Lanka cricket is served and creating an environment (ideally with the help from ICC) where the players can fulfil their dream of playing for and serving their county, while not compromising on their right to earn a fair market value.