Sri Lanka possessed a team capable of winning the World Cup, if only they had competent officials in their administration. AFP/File/Ishara S.KODIKARA.

Losing Kumar Sangakkara as captain after he had only served for two years was a monumental loss for Sri Lanka. But it could have been avoided had Sri Lanka Cricket (SLC) been led by competent administrators. Sri Lankan cricket has lost so much in recent months but the government does not want you to know.

Let’s go back to the days and weeks before the start of World Cup 2011. Sangakkara’s team, the hosts, had not played or practised, at the grand stadium constructed in the middle of a jungle in President Mahinda Rajapaksa’s sparsely populated home town of Hambantota.

"The construction of the venues were delayed and the November 30 deadline set by the world governing body, International Cricket Council was not met," Xinhua reported in February.

Asanka Gurusinha, who batted at number-three in the 1996 World Cup final, called it “a shame”, when asked about his thoughts on Sri Lanka losing home advantage; construction delays due to the incompetence of SLC’s administrators saw that Sri Lanka missed the chance to use the new facilities ahead of the World Cup – home conditions were alien to the co-hosts.

To add to that, even after Sangakkara pleaded with SLC not to terminate Chandika Hathurusingha’s contract, former SLC chairman Somachandra de Silva wanted his way, putting aside the best interest of Sri Lanka and the needs of the captain.

In his speech at Lord’s last week, Sangakkara said that the 1996 World Cup win had a negative impact on Sri Lanka. Why?

Because, he says, it “brought less welcome changes with the start of detrimental cricket board politics and the transformation our cricket administration from a volunteer-led organisation run by well-meaning men of integrity into a multi-million dollar organisation that has been in turmoil ever since.”

“We have to aspire to better administration. The administration needs to adopt the same values enshrined by the team over the years: integrity, transparency, commitment and discipline,” Sangakkara said during the 11th Cowdrey lecture at Lord’s. 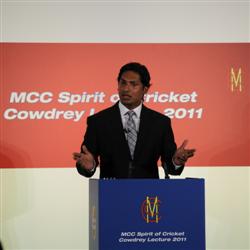 “Unless the administration is capable of becoming more professional, forward-thinking and transparent then we risk alienating the common man. Indeed, this is already happening. Loyal fans are becoming increasingly disillusioned. This is very dangerous because it is not the administrators or players that sustain the game– it is the cricket-loving public. It is their passion that powers cricket and if they turn their backs on cricket then the whole system will come crashing down.

“The solution to this may be the ICC taking a stand to suspend member boards with any direct detrimental political interference and allegations of corruption and mismanagement. This will negate the ability to field representative teams or receive funding and other accompanying benefits from the ICC. But as a Sri Lankan I hope we have the strength to find the answers ourselves.”

Sangakkara added that the “instability of our administration is a huge stumbling block to the rapid face-change that we need.”

“Indeed, it is amazing that that despite this system we are able to produce so many world-class cricketers,” he said.

But even though SLC is faced with a massive financial crisis, allegations of fraud and financial mismanagement, along with the fact that they are also seeking a bail out from the state to prevent total collapse, the government has painted a contrasting picture to its citizens.

The following is from the state-run Daily News,

Asked about the rampant corruption allegations against the just deposed Interim Committee and widely reported in both the print and electronic media, [Upali Dharmadasa] said that despite all the allegations that the situation was not as bad as reported. He also reminded of the hoary Sinhala idiom which says that that the devil was not as dark as perceived to be!!

Asked about his personal sentiments about two brothers of the same family serving as Heads of Sri Lanka Cricket, he said that commitment to sports has been a family passion and that he and the family will assist any one who needs assistance in the sporting arena.

The previous government appointed interim committee, operated by Chairman Somachandra de Silva and Secretary Nishantha Ranatunga, went over their World Cup 2011 budget and left SLC in debt to the tune of 69 million US dollars. How then can Dharmadasa say “despite all the allegations that the situation was not as bad as reported”?

What’s clear is that the government has appointed another group of its own cronies to replace the previous committee and they continue to fool the Sri Lankan public with their blatantly false propaganda.

Yesterday, The Island published the following,

The Auditor General, in a damning report on SLC sent to the parliamentary watchdog committee, COPE (Committee on Public Enterprises) revealed the irregularities regarding the issue of free tickets, though it didn’t identify various categories of recipients of complimentary tickets.

According to the AG, 272,318 tickets to the value of Rs. 96,218,150 were printed for 12 WC 2011 matches played at the Premadasa stadium, the Pallekele Stadium and at the Mahinda Rajapaksa Stadium. Although, tickets valued at Rs. 89,347,890 had been sold, SLC so far received only Rs.67, 384,490, the AG revealed. The AG blamed SLC and World Cup Secretariat for failing to provide written directives regarding the issue of free tickets, though 50,847 complimentary tickets had been printed.

Let me also remind you that SLC has not awarded player contracts to Sri Lankan cricketers this year – we are already into the seventh month of 2011.

The results are showing; a World Cup final loss, a Test and ODI series defeat to England. What’s next?