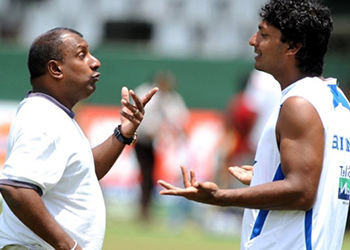 Some people just try too hard to stand out. They dare to be different and in the process trod on their own objectives and embrace impracticality, resulting in mediocrity. That’s the story of Sri Lanka’s captain Kumar Sangakkara.

Don’t let Sri Lanka’s odd success or even their Test ranking convince you otherwise. Sri Lanka has a gifted bowling attack and batsmen who can turn around Test matches. And it’s only fair to say that it is only thanks to Muralitharan, Malinga, Mendis and others that the Sri Lankan captain has had some success. Which is what disturbs me the most; you can’t fly under the radar with the odd win in Tests when you have what some consider to be the best bowling line up going around these days.


From the start of day five in the third and final Test match against India, which India won yesterday at the P Sara Oval, the entire Ten sports television commentary team expressed how they were baffled by Kumar Sangakkara’s tactics. Tony Greig, Arun Lal, Russel Arnold, Ranil Abeynaike and Mike Haysmen were all critical of Sangakkara’s captaincy.

It started with India needing 204 to win and at the crease were night watchman Ishant Sharma and Sachin Tendulkar. At 53/3 the visitors were under pressure, but it soon became clear that Suraj Randiv’s hard work in the final session of day four would be wasted by his skipper.

Sangakkara placed deep fielders in the first over of the morning giving night watchman Sharma and the immensely experienced Tendulkar an opportunity to rotate the strike easily and accumulate runs, slow and steady; Sangakkara played right into the hands of India in his attempt to prevent boundaries.

Tendulkar effortlessly took singles to get off strike thanks to fielders placed deep and the Sri Lankan captain’s negative tactics within the first three overs of the day. The point is highlighted further when Tendulkar reached his half century; 38 runs from his 50 were in singles and twos.

"I am disappointed with the bowling changes and Sangakkara’s captaincy tactics," former skipper Sanath Jayasuriya in the Ten Sports studios as part of an expert panel said at the end of the match.

When Kumar Sangakkara bowled Welegedera ahead of strike bowler Malinga, South African commentator Mike Haysmen said that Welegedera would be the last choice in his mind under the current circumstances.

"Of all the bowlers this morning, Welegedera would have been the last choice, at least in my mind," Haysmen said on air.

By the fifth over of the morning Sangakkara had the commentary team totally baffled. Wtih cricket commentators striving to be politically correct rather than brutally honest, the commentators claimed they were "confused" at the tactics by the Sri Lankan captain, but none had the balls to come out and say that Sangakkara’s tactics were right out stupid.

Randiv, Sri Lanka’s most successful bowler in the match was asked to bowl a middle and leg stump line with a leg slip and a silly mid-on. Here is a bowler who has the ability to bowl a straighter one, or the Doosra, but bowling around the wicket without a slip showed us how even a spinner of Randiv’s calibre had to dance to the skipper’s ideology. He was not given the license to set his own fields and or bowl to a strategy that works for him.

If you thought Sangakkara was a progressive captain, think again.

At the fall of Sharma’s wicket, the new batsman Laxman wasn’t under any pressure; Sangakakra didn’t even think a slip was needed for Laxman who was struggling with his batting on this tour.

"I don’t understand this long-on and long-off. I am bemused at the moment," Haysmen claimed, drawing attention again to Sangakkara’s unintelligent field placings.

Sangakkara’s strategy catered more to prevent bad bowling than picking up wickets for a victory.

"There are only six people playing for Sri Lanka. The rest are loitering around the boundary," Haysmen added later with more frustration evident in his voice.

Finally when Lasith Malinga was introduced, almost an hour of play had passed. That’s not nearly as shocking as when Sangakkara bowled Muralitharan in Galle during Muralitharan’s final Test match after 90 minutes of play!

Even with Malinga attempting to bowl his quick short pitched stuff, a silly mid-on, or a leg slip was nowhere to be seen. Was the captain of Sri Lanka trying to stifle the run rate in hopes of forcing the Indians into making mistakes? Had a more skilled captain been given a bowling attack which comprised Lasith Malinga, Ajantha Mendis, and Suraj Randiv, I would bet my wages that a score of 200 plus would have been easily defended on a day five wicket in Colombo.

During the series Greig said on air that Sangakkara didn’t find any of his own tactics to be negative. Therein lies the problem.

It is time we call a spade, a spade and recognise that while Sangakkara is a great batsman, he is not a good captain. The Sri Lankan captain reminds of me the Goth kids in high school who dress up in all black, wear chains, listen to dark rock music and hate the sunlight. What do they have in common with Sangakkara you ask? They both try so hard to be different but fail at they primary objective.