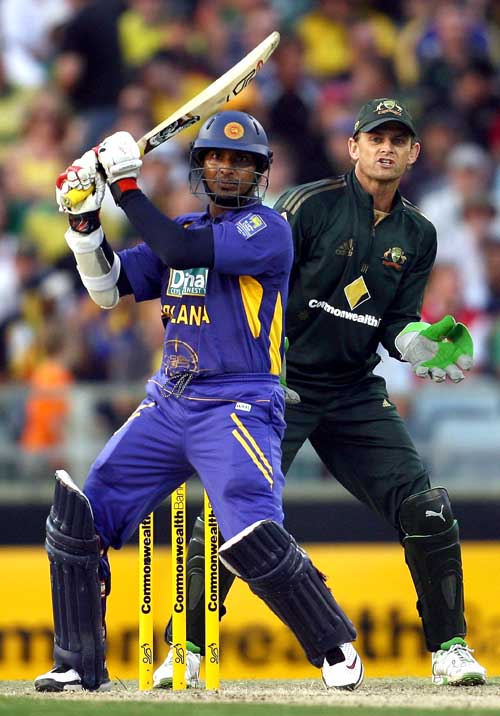 **This is not a personal attack on Sanga, but a serious take on today’s game, what went wrong and why we need to fix it fast**

I thought this might happen after seeing our batsmen put up a very challenging total, on a ground where 300+ scores have been hard to come by.

What I saw was very ordinary captaincy by Sanga, and that’s putting it mildly.

Imagine this: Sehwag and Tendulkar back in the hut and still around 300 to chase (India – 2/23). Just when they need to rebuild the innings with a good, long partnership, Sanga does the exact opposite of what any good captain will do in that situation. He pushes the field back and goes on the defence!

Malinga, while far from being at his best, still induces a thick edge off Gambhir while Gambhir is on 15. The captain in his now characteristically negative manner hasn’t got a slip in and the ball flies off for 4 (at a nice catchable height for the imaginary slip).

On flat Indian pitches, you have to set attacking fields and grab every opportunity. Gambhir of course scored the winning runs.

Gambhir and Kohli, instead of being put under pressure, were allowed to milk the bowling around as much as they fancied. Out of a partnership of 224, over a hundred were given away in singles. Instead of bringing the field in and forcing the batsmen to take risks, Sanga allowed them a free ride to the finish line.

The result: the Indian batsmen went unchallenged and kept a healthy amount of wickets left to make sure the chase doesn’t derail.

It was heartbreaking to watch Sanga give the game away, but it had an odd sense of predictability about it. If I had been unsure before, now I’m convinced that Sanga is way too defensive and negative as a captain.

Then, to have the audacity to call this the most competitive we have been since his debut? Excuse me, what? Could you repeat that please?

A 3-1 (probably going to be 4-1) series loss, a highly worrying of series of losses (at home and away) since the heights of the 2007 world cup and Moody’s departure, and let’s not forget the number 7 ranking.

I know we’ve had a lot of injuries this tour but the most competitive since 2000 in ODIs? That’s just utter nonsense Sanga and I think you know it. Trying to divert attention from that awful display of thoughtless captaincy are we?

Trust me Sanga, unless several exceptional performances are strung together in 2011 by Dilshan and co, we can kiss the World Cup goodbye. Unless you learn to captain and motivate a side much better in order to win pressure games, we can probably forget about entering the semi-finals too. I’m willing to give you the benefit of the doubt as you’ve only had the leadership for a few months still, but the evidence so far presents a bleak picture for our team.

No doubt you’re still learning but please make some changes to your thinking and strategy.