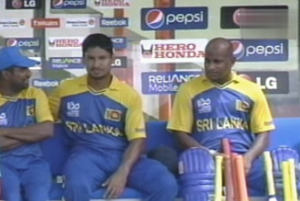 What a fitting start to the tournament, although it would be perfect if the Sri Lankans were on the winning side. In first place it shouldn’t be go to the last over. Sri Lanka batted, barring Mahela & Chandimal, like they could have got time to bat forever. So the final total was 20-30 runs short and its almost we had lost the match before New Zealanders entered to bat in the second half, but some determined bowling kept us in the match till to the end.


There were few turning points. First is the way how Dilshan and Sanga batted in the initial overs. They had wasted 30 balls for just 7 runs before getting bowled cheaply. So there are some concerns who should open with Mahela against Zimbabwe, but i think Sri Lankan think tank would not tinker with the openers,atleast for that match.

But to me Chandimal is the perfect man to bat at No. 03, as he can utilize the batting powerplay with his big-hitting if one of openers fall or he can consolidate the innings just like he did against Kiwis. So in that sense Sanga can just wait and see what’s going on in the middle and can bat according to the situation. Flexibility is a must in a good batting line-up.

And now the biggest concern for Sri Lanka is what’s the ideal position for Sanath to bat. In the last match he couldn’t face a ball even, but i think sending Kapugedara is okay, cause he was the in-form batsman out of those three, but Sanath should have been sent ahead of Mathews. Finally it cost us some runs. By the way considering his tons of experience i would like to see him using as a floater in the line-up.

And the next change would be to use Thissara Perera at the expense of Welagedara. Left arm seamer didn’t have a great day and went for 20+ runs from just two overs. Although he got the price scalp of Oram, I think Perera would get the nod. In this Gayana pitch medium pacers like Chigumbara and Styris fared really well and Perera is a same kind of bowler plus a hard hitter too.

Finally I believe we still can beat Zimbabwe even they are in a role by beating Australia and Pakistan in warm-ups. But going into the knockout stage would be really hard. These seeding system means Sri Lanka will be in the same group as, if there are not any upsets, Australia,India & West Indies. Sounds cool,isn’t it? So the lions should and must have to up their standards soon to challenge others and advance.Lets wish for now that we will not get to witness about any upset in the Monday evening.