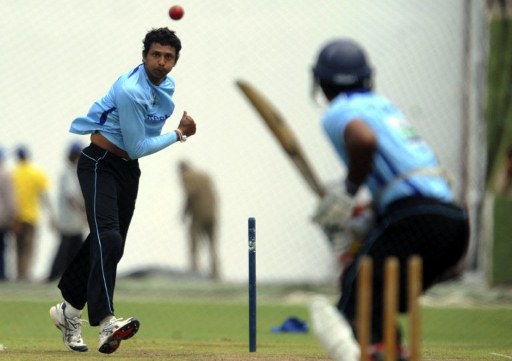 On his blog The Cricket Sadist hour on ESPNCricinfo, Jarrod Kimber talks about day five of the second Test between England and Sri Lanka at the P. Sara Oval.

He mentions eavesdropping on an interesting meeting between Graeme Swann and Suraj Randiv.

Randiv and Swann were talking about spin bowling and Swann had given Randiv some handy tips.

The first bits I heard where Swann talking about wrist position. My persistence had paid off. For the next three minutes I was listening to a spin bowling masterclass. Randiv had clearly asked Swann about his action and whether he imparted too much over-spin on the ball. Swann explained his own action, and suggested that too much over-spin wasn’t a problem for Randiv as he still ragged it.

Wrists, fingers, arm height and follow through were all discussed as Randiv, and I, listened intently. Randiv, Swanny’s Padawan learner, and me, the lucky eavesdropper.

The conversation ended with Swanny being very complimentary to Randiv about his bowling. He never said ‘attaboy’, but it was one of those sorts of conversations. I assume it boosted Randiv; even I was ready to hit the nets and try a few offies to see if Swann’s words could help me. And I’m a leggie.