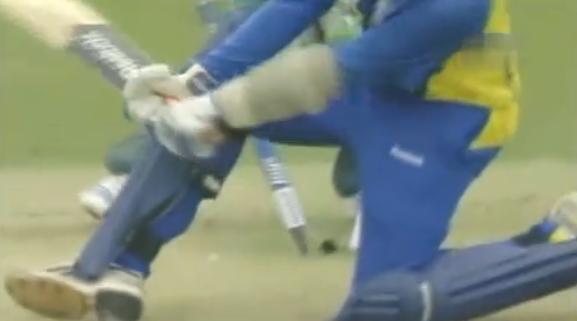 Last year at the ICC World Twenty20 we played South Africa in a warm-up game and found ourselves at 35/3 before Mahela Jayawardene (MJ) had a brain explosion and chose to go for a Reverse Sweep. Botha pitched it full, the ball went through MJ’s legs and uprooted his stumps. MJ attempted to find the gap on the off-side with a stroke which has been historically a low percentage option; more risk than runs. The four runs he sought didn’t even compare to the strife he put his side in – Sri Lanka were four down for 35!

Fast forward to 2010 and Jayawardene’s run making options in Twenty20 cricket have changed. He has turned to what he knows best which is proper cricket strokes and focusing on timing the ball.

That lesson, however, Sangakkara is yet to learn. After scoring 52 sublime and silken runs, Sangakkara undid all his hard work attempting the atrocious stroke against Deccan Chargers at Dharamsala.

The shot is neither innovative nor entertaining. It is old, outdated and an option that has never consistently produced runs for any single batsman.

Take your mind back to Mike Gatting at the 1987 World Cup where he needlessly attempted the stroke to Allan Border when his side was on course for victory. He top edged the ball to the Keeper and England subsequently lost the match as a result of Gatting’s dismissal.

If anything the Reverse sweep has proven its self over time to favour the opposition than the batting side. So, "put the shot away son!"