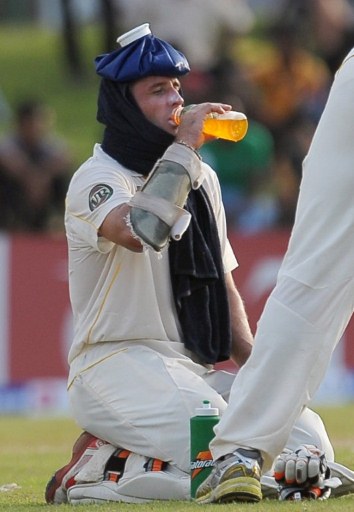 Everyone scratched around but only Hussey got ugly enough to get past 50. Khawaja didn’t really look like he wanted to be there for most of his innings. Ponting looked solid but had a brain freeze.

Kept losing wickets eitherside of intervals. Which is a big no no these days. Hussey is turning batting ugly into an art form. Today he pulled out one which was hard on the eyes but important for Australia. He never really looked like he was in any form. But almost got a 100 which he easily deserved.

273 might not sound a lot but if they bowl well , on this pitch, it can keep them in the game.

Things looked a bit bleak when Watson took 20 off an over but quickly turned it around with wickets everytime Australia looked set. Bowled as a unit like we suggested. Herath troubled the Australians with his straighter one. Lakmal , Radiv , Dilshan were steady. Welegedara produced an absolute jaffa to send Khawaja on his way.

Dilshan captained well throughout the day, except when he put the entire field on the rope at the end of the day. Unnecessary and looked ugly when it really didn’t need to. At this point Sri Lanka are where they want to be. Bowled out the opposition on day 1 after loosing the toss. Rest is up to the batters.

There was a lot of chat leading up to the game and as soon as Aus lost a wicket. If this wicket was a woman, it would be the one that kept putting off sex even after the 5th date, you’ve wined and dined her but still getting no ROI. Doubt anyone will ever be set on this pitch as long as the bowlers keep the pressure up. It will be tough, but that’s why it’s called test cricket.

Play of the Day
Tom Moody inadvertently being a passive racist when he compared Russel Arnold to a ‘small black’ turtle.

Welegedara claiming a catch after he touched the rope. You knew, we knew that you knew dude. I guess that’s one way to test the UDRS.