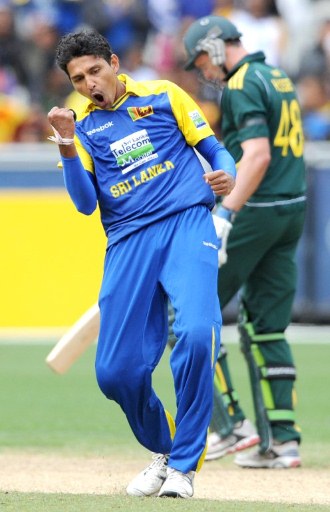 I laughed so hard when David ‘Bumble’ Lloyd brought up Suraj Randiv’s Test stats to claim that he was an ‘ordinary bowler’, after the English team’s collapse, chasing Sri Lanka’s 309/5 in the second One-Dayer.

What Lloyd forgot to mention was that Randiv has only played three Test matches, but that didn’t stop him from referring to him as an ordinary bowler, by pointing to his Test average of 40.50.

Bumble was oblivious to the fact that when Eoin Morgan was stumped off Randiv, the canny spinner delivered the ball from well behind, near the bowling crease. He tossed a big spinning off break from so far behind, that Morgan, who was charging down the wicket, had no chance in getting anywhere near the pitch of it; even Sangakkara had trouble dealing with the extra bounce, because the ball had pitched that far down the wicket.

But Bumble was clueless.

Annoyed by the Sri Lankan spinners’ dominance, Bumble blamed the English batsman. He was upset that they couldn’t deal with these ordinary bowlers.

I bet he didn’t realise that several deliveries before Tim Bresnan was caught on the deep mid-wicket boundary, Randiv had foxed the batsman with a mixture of off-spinners and straighter ones – both the Bresnan dismissal and the Craig Kieswetter dismissal were as a result of the batsman playing across the line to what they thought would be off-spin. What they got, instead, was a top edge thanks to subtle variation.

Bumble had good support in Ian ‘Beefy’ Botham, who can never seem to get a leg-before decision right without a slow-mo replay. When Beefy says: “That’s not out” and he claims a referral was wasted, I’ll bet my wages that it’s plumb LBW.

"You got to know what you’re doing on these good surfaces,” Holding said, implying that the bowling on show didn’t know what to do on a good batting track. Maybe Holding forgot which part of the world Sri Lanka came from, or maybe he forgot these were two-time World Cup finalist and one time World Cup champions he was talking about? Someone please remind him that Sri Lanka come from a part of the world where you get nothing but batting-friendly surfaces.

When Bumble and Holding were on commentary, at the start of England’s innings, the viewers were given an impression that Sri Lanka had no chance of winning. But the moment commentators changed and Nasser Hussein and Russel Arnold came on, a more balanced view was presented.

“It’s a matter of getting through these overs, the power-plays,” Arnold said.

“That’s why they are working hard, trying to keep the runs down [and] to push that run rate up. The moment it goes past six [runs per over], they are very comfortable."

Arnold knew the game-plan; England were chasing more than 300 runs and it didn’t matter if the openers put on a 50-run partnership in the 10th over – Sri Lanka could care less if they had wickets in hand, provided the power-plays didn’t concede too many runs.

Arnold and Sri Lanka knew that the spinners, along with Lasith Malinga could choke the Englishmen, sending the required run rate above and beyond a manageable rate.

Let’s hope that the English cricketers are just as clueless as some of the Sky Sports commentators and Sri Lanka are able to clinch this series 4-1, in order to move up to second place in the ICC ODI rankings.