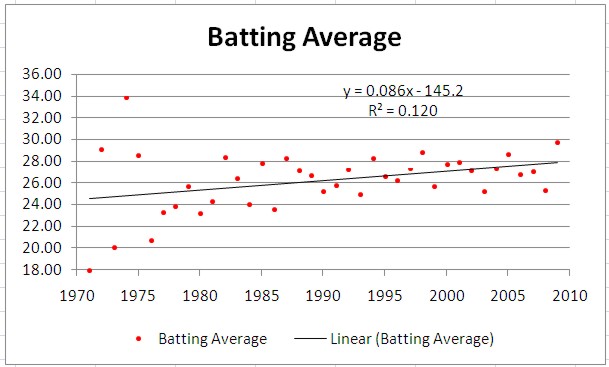 One Day International cricket has a 38 year history starting from 1971.

Since then it has seen many changes of rules and technology. The fielding restrictions in first 15 overs, super sub, power plays and batting power plays are few advances of the game. Allowing a bouncer per over is another deciding point in ODI cricket.

Considering all these factors we can easily decide that ODIs have evolved more than test cricket with time.


Great batsmen and bowlers have played this game and finding who is the best is little tricky as the game has evolved so much. To illustrate the changes in the game in batsman’s point of view, I first looked at the batting averages from 1971 to 2009.

This graph shows the change of batting averages of all batsmen with time. There is a definite increase in the average (0.086 per year) since start of the ODIs. Then I looked at the batting strike rates since 1971.

How do we compare them?

As the game has been changing as I have mentioned above, comparing statistics of players of two era can become difficult. The better option hence is to compare the player with rest of the players in the world (ROW) that played cricket. The superiority showed by a player in an era means that he could do the same thing in a different era as well, but the stats might differ.

The Risk Index (RI) is defined as product of average and SR. It assumes that making 30 runs with a SR of 80 has same risk as making 40 runs at SR of 60. Put in other words making 30 off 37 balls involved roughly the same risk of making 40 off 66 balls. With the help of stats already described above it was calculated how much better RI the player had compared to the RI of ROW.

Longevity is another factor that we have to identify when looking at the greats. Averaging 35 over 30 matches in 2 years is easier than doing it over 300 matches over 15 years. Hence the batsmen with long careers had to be identified better than ones who had short ones. Longevity Index (LI) was calculated to evaluate longevity. 95% of all batsmen have played between 1-198 ODIs.

Do we consider minnows?

This was a difficult question. Minnows were in ODI’s since 1975. Sri Lanka up to 1992, East Africa, Zimbabwe, Bangladesh and Kenya were minnows of some standard. Matches against these countries were included. But matches against other non-test sides were excluded as they were not ODI standard.

As expected Sachin and Viv hold on to top spots, followed up by Jayasuriya, Bevan and Ponting. It shows how good players were Inzi, Gilly, Lara, Azhar and Aravinda are. Despite having a low average, Ranatunga manages to hold on to #19 ahead of Dravid.