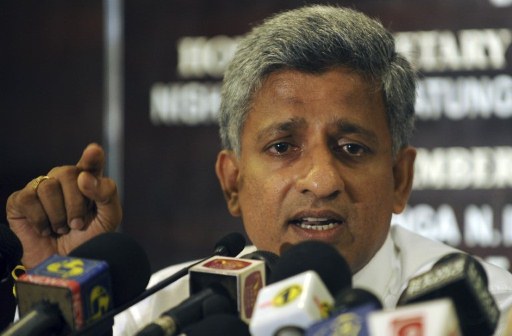 An interesting verbal battle is currently unfolding between the controversial secretary of SLC Nishantha Ranatunga and The Island newspaper.

Last week The Island published an article on its website without a by-line, which accused the president of SLC Upali Dharmadasa of being "just a puppet at the hands of politicians" for allowing Ranatunga to attend the ICC CEOs meeting.

The article went on to attack Ranatunga calling him unsuitable to even "sit on a Big Match Cricket Committee" and called it a "shame on the [part] government to have backed Nishantha Ranatunga to the hilt for the post of Secretary of SLC".

Ranatunga has responded. But what’s interesting is The Island’s sports editor’s rebuttal which is published below.

Sports Editor’s Note: At the very outset, we would like to mention that according to Sri Lanka’s Sports Law, Nishantha Ranatunga is not fit to hold office at Sri Lanka Cricket, let alone represent the board at global fora as he is the head of a media institution. Howzaaaaaat?

Although the reply to our report has been signed by Brian Thomas, Nishantha’s hand in it is only too obvious. Hence, we consider it a reply by Nishantha.

We would like to remind Hirantha and Nuzki that when Nishantha held office as Secretary of the Interim Committee, SLC was under investigation by the parliamentary watchdog, Committee on Public Enterprises (COPE).

It has been said that the reason why Nishantha was chosen for the ICC CEOs’ meeting was his administrative skills, but let them be reminded that Nishantha was naïve enough to accept an offer by Somerset Ventures for Sri Lanka’s domestic tournament, though that offer came via a hotmail account.

COPE held that the agreement with Somerset Ventures had caused considerable losses to SLC. The COPE probe also highlighted several shortcomings in the deal, when Nishantha held office at the cricket board on the previous occasion and if Nuzki and Hirantha think that he is the best man to champion Sri Lanka Cricket’s case, good luck to them.

When Prakash Schafter attended the ICC CEOs’ meeting, we inquired from SLC why the Secretary of the Board was representing Sri Lanka, instead of the CEO. We were made to understand that instead of Schafter, the CEO would attend ICC meetings as the board had confidence in Ajit Jayasekara, who had just been promoted as CEO, after serving the board as Additional CEO.

Nishantha has, in his reply, true to form, taken a swipe at Mr. Duleep Mendis, the country’s first cricketing hero in the post-Test era. Mr. Mendis has devoted his life to Sri Lankan cricket for about four decades and faced many a bouncer and sustained several painful blows as he did during the inaugural World Cup in 1975, at the hands of Jeff Thomson. But this unkind bouncer from Nishantha Ranatunga, who was only a wobbly medium pacer, is doubly unkind.

Nishantha claims Mr. Mendis was paid three months of his salary and was allowed to keep his car valued at Rs. 3.5 million. The service rendered by Mr. Mendis to Sri Lankan cricket is invaluable and it cannot be measured in terms of rupees and cents or ageing automobiles. Besides being a Sri Lankan captain, Mr. Mendis held many prestigious positions at Sri Lankan Cricket such as Manager of the National team, Coach of the National team and Member of the National Selection Panel, years before the sport became professional. He never went behind politicians or their progeny seeking positions. Such great cricketers must be respected by one and all.

We would like to mention that SLC paid over Rs. 2.5 million to Nishantha as mere allowances during his overseas junkets during two years! When Mr. Mendis retired, he should have been given at least 100 times that amount as terminal benefits!

Mr. Mendis responding to Nishantha’s allegation that he did not do enough to ensure that Sri Lanka won the hosting rights of the 2009 World T-20, says he carried out all duties entrusted to him by successive Executive Committees and Interim Committees of SLC and never failed in his duty. When a person of Mr. Mendis’ calibre speaks, the world listens!

Interestingly, Nishantha has unwittingly admitted that Mr. Mendis was sidelined during his previous term. When we reported this fact on previous occasions, Nishantha not only categorically denied it but also claimed that The Island was trying to create a rift behind them.

Nothing is further from the truth than Nishantha’s claim that we have been critical of SLC CEO Ajit Jayasekara. Nay, it is a diabolical lie! We have nothing but respect for that retired Air Force officer, whose integrity has never been in question.

One reason for such an excellent run by the National team was that Jayasekara was a strict disciplinarian. There’s a well-kept secret about Sri Lankan cricket. It has to do with something that happened during the 2003 World Cup in South Africa, when Jayasekara returned as Manager of the National team for a second stint. When a champion bowler was found guilty of breaching discipline, Jayasekara decided that the culprit should return home half way through the tour. No amount of pleading even by Captain Sanath Jayasuriya and senior player Aravinda de Silva made Jayasekara change his stance. When Sanath and Aravinda tried to corner him, he minced no words in telling them: "Remember, you b…s have only played for Sri Lanka but I have risked my life fighting for my country."

However, subsequently Jayasekera softened his stance, after the bowler concerned came up with an unreserved apology, promising to behave. Why should we or anyone else for that matter ever criticize such a wonderful gentleman when the present-day cricket administrators go behind players to go places? They cannot hold a candle to Jayasekera!

Men like Jayasekara are a rare breed and he is the ideal person to be the CEO of the board and to represent the country at global fora. He is quite articulate and well informed to do so.

Nishantha’s claim of having helped Sri Lanka secure cricket tours is ludicrous to say the least. He tries to take the credit for bringing in a whopping sum of money to SLC. Would he also own up to his contribution to the colossal losses SLC incurred to the tune of Rs. seven billion when he was the Secretary of the Interim Committee?

Let Nishantha be reminded that there were several board officials before him who successfully negotiated foreign cricket tours at the height of the civil war in the country. Nishantha found himself ensconced in that position at a time when the war was over and therefore no team would have had any problem with visiting Sri Lanka.

And no board official previously has taken credit for accomplishing that task because, we reckon, they had other achievements to flaunt.

If Nishantha claims that he has an excellent rapport with cricket officials overseas, we would like to ask him why he pathetically failed to persuade the Indian players to take part in the (now defunct) Sri Lanka Premier League (SLPL) tournament. We would also like to ask why Lord’s refused permission for a press conference that he was going to hold to announce the SLPL last summer.

A few days after Nishantha was no-balled by Lord’s, Kumar Sangakkara summed up the state of affairs at Sri Lankan Cricket by calling those who had run the show at SLC as ‘partisan cronies’. Kumar being the gentleman that he is was charitable. We would have said ‘partisan clowns’!

Having competed a disastrous term as Secretary of the Interim Committee, there’s no way Nishantha would have got elected to office at SLC again early this year, but for political patronage.

Nishantha calls Musli Power a health product. Well, that is debatable. We insist that it a sex product. But, those with sex problems may consider it a health product! We hope Nishantha and his ventriloquist’s dummy, Brian, will agree. We desist from giving the web address of Musli Power. But, anyone desirous of verifying our claim may consult Uncle Google and see for themselves who is telling the truth. It is a crying shame that prominent cricketers are being used to promote a sex product. It is hoped that President Mahinda Rajapaksa will take serious note of this issue and adopt remedial measures. We desist from requesting lesser politicians to investigate the matter as they themselves must be beneficiaries of free samples of Musli Power.

It is claimed in the reply at issue that during D. S. de Silva’s and Nishantha Ranatunga’s tenure the National cricket team reached the number two rank in world cricket. That exactly is the point we have been trying to make. If not for the bungling by those two self-important worthies at the helm of SLC, Kumar would have definitely made his team No 1 in the world!

We profusely thank Brian for having given us an opportunity to reveal the aforesaid facts and look forward to another reply from him on behalf of his boss.

With rancour and malice towards none!