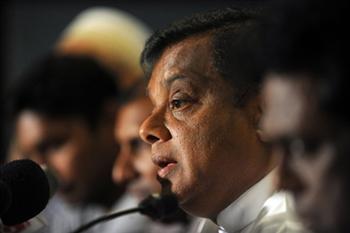 Last week the new Sports Minister came out all guns blazing calling the Sri Lanka Cricket administration the third most corrupt institution on the island. He said that SLC is only behind the police force and government educational institutions when it comes to corruption.

Then the new Minister of Sports claimed that he would reveal the financial irregularities and those behind it in the coming weeks, while informing the mass media at the same press conference that he would replace the corrupt interim committee.

Four days later, minister Chandrasiri Bandara Rathnayake, has backtracked on his words and retained those individuals he vilified earlier.


I saw this coming. The evil that is destroying our cricket through corruption, abuse of power, and other misdeeds cannot be easily crushed. They gain the backing to plunder our resources from the very top; the corrupt can’t be expected to end corruption. But, there appears to be more to the story than what meets the eye.

While the Sports Minister’s intentions were good, some would say that he is yet again nothing more than a mere puppet with no authority. It may appear as though we can’t count on him to clean up SLC any time soon; we can perhaps expect change after the 2011 World Cup.

The following is from The Island today,

Minister of Sports C. B. Ratnayake’s sensational revelation last week that Sri Lanka Cricket was a rat hole, where corruption thrived attracted headlines and cricket supporters were looking for a change. But barely 48 hours after the allegation, the minister extended the term of D. S. de Silva as Chairman of the Interim Committee and Nishantha Ranatunga as its Secretary.

As soon as D. S. de Silva assumed duties as President of the Cricket Interim Committee, some of the first appointments he made were those of his two nephews Suraj and Kapila Dandeniya. While Suraj draws a cool salary close to Rs. 600,000.00 and enjoy perks, his cousin Kapila draws a salary of Rs. 225,000.00 besides attractive perks.

All leading institutions in the country to maintain efficiency and transparency conduct interviews before recruiting even peons. But those criteria are conspicuous by their absence at SLC. These high profile jobs were offered on a platter to the Chairman’s dear and near ones without any interviews and the Sports Ministry, a body that should intervene when officials go overboard, has turned a blind eye.

I believe that while it’s true that those holding various positions of authority within SLC may not even be qualified for the job, that criticism should be directed at the individual who first appointed them, and not at the man who is forced to retain their services. With the 2011 ICC World Cup only nine months away, it is possible that minister Rathnayake did not want to dissolve the entire committee that was responsible for planning the event.

Amidst all this Pramodya Wickramasinghe, Vaas’ new ball partner from the 1996 World Cup side, who served in the previous interim-committee that was partially replaced by C.B. Rathnayake this week, has issued a statement to the Daily Mirror,

There has been many conflicting reports in the Media regarding my resignation from the Interim Committee of Sri Lanka Cricket. As such I would like to clarify my position to the Media as well the Cricket loving public.

I had personally handed over my letter of resignation to the Hon. Minister of Sports last morning which he accepted. It was later in the day that the new interim committee was named. So I wish to state that I had tendered my resignation from the Cricket Interim committee and was not removed from the committee as reported in certain media.

I have clearly outlined the reasons for my decision to resign in the resignation letter. However, for the General Public who are unaware of the contents I wish to repeat that I was disillusioned with the way the former Interim Committee was functioning. Several vital decisions, especially decisions with regard the World Cup Organizing were taken without the Unanimous consent of the Committee. I was told that these decisions have to be implemented. I did protest at some of these decisions and also asked the Secretary to minute the same. I even complained once to the Secretary of Sports Mr. Liyanagamage regarding an incident at the Sports Ministry.

There were also outsiders sitting at Committee meetings and dictating terms at one point. I was also a member who vehemently opposed and stopped this practice.

I have rendered my services to the Cricket Board with utmost dedication and true to my conscience at all times. I have made many sacrifices and spent most of my time at the Cricket headquarters during the past one year. I did not do so for any remuneration but merely for the love of the sport on a honorary capacity. I wish Sri Lanka Cricket all the best in its future endeavours.