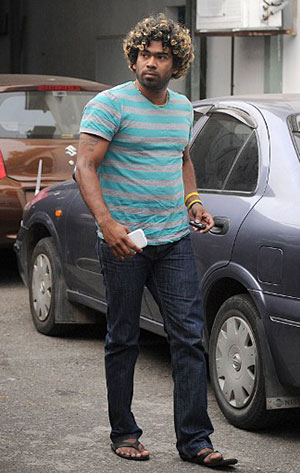 The story of Lasith Malinga is a curious one. From wayward bowler, to a hero that made the general public act like a bunch of teenaged girls at a Justin Bieber concert; to IPL mercenary, villain and now the scapegoat to everything from child prostitution to global warming.

When yours truly queried last year why his IPL heroics were not replicated when he was playing for Sri Lanka, the Island Cricket community had mixed views, but now it seems goldilocks has hit the lowest point in the popularity meter after that little tiff with the saviours (ahem, ahem) of Sri Lankan cricket, the beloved media.

Those who followed events of recent times will have seen the discussion program on a well known TV station featuring Sanath Jayasuriya, the presenter, a man who was introduced as a journalist and two hitherto unknown characters. Malinga probably put himself down a bit by responding to their accusations and having a verbal spat with the journalist over the phone. A sought-after international cricketer shouldn’t have stooped to that level. That shows Malinga’s weakness – he doesn’t know how to handle himself. What a moment for the journalist though – a relatively unknown scribe, having a spat with one of the most recognised cricketing icons of our generation.

Malinga was probably still fuming over that when the contract issue flared up. Now we know that there is a rule that players cannot talk to the media, as per their arrangement with the SLC. Kumar Sangakkara explained that to the Media personnel who converged upon him recently. When they converged upon Mumbai’s favorite son, he got pissed off and denied them any information. If he had, the newsmongers would have held on to that bit, made a huge fuss and probably landed him in hot water with the SLC. But of course, that’s not the journalist’s problem is it? All he wants is a hot story. Now the media have a way of getting their own back. They act like snakes at times. As soon as they are snubbed, they turn into vengeful creatures. When they inquired from his Slinginess what business had he at SLC on a bright and cheery morning, Malinga, not very politely, asked them to mind their own business.

That should have been the end of that – but nope. The media stirred the public. Thanks to social media, by lunch time today, numerous posts were on Facebook denouncing Malinga. Hundreds of the Facebook generation, were branding him as a third-class mercenary, a hot-head, a man who forgot his roots, etc.

This just shows the problem with today’s internet-savvy public. They know how to type, but they don’t know how to use the grey matter resting on their shoulders and take a moderate view on things. They are very easy to influence, like a bunch of kids who believe in Santa. This is the same weakness that racist factions are exploiting to stir ethnic hatred through social media. The saddening part is by acting like that, the Sri Lankan public clearly showed the world that they have strong Indian roots.

The media claim they built Malinga’s reputation. There maybe some truth to this claim: they published many flattering articles and sugary interviews, but a player’s image is built mainly on his on-field achievements. People say Shane Warne was hyped by the media. How on earth did he end up with a 700+ Test wickets, if he was just an overhyped player?

If the media are truly interested in the development of the game, there are hundreds of other issues to address, and not hound a celebrity. But they won’t, because at the end of the day all they want is a big story. They sure have one now.