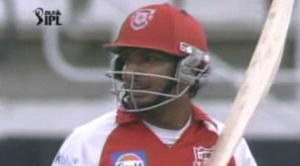 It’s fair to say that rain or no rain the Kolkata Knight Riders, assisted by the big hitting Gayle, were cruising to a win. Duckworth and Lewis, however, ended the misery for Preity Zinta’s men.

Earlier in the day KKR won the toss and fielded first. The Sri Lankan nationals on show, Sanga and Mahela, showed glimpses of what the tournament may hold for them both.

yet managed to score more than a run-a-ball. This is probably the best approach for a batsman like Sangakkara. He needs to do the basics right, rotate the strike, and put the bad balls away with technically correct stroke play.

Mahela on the other hand looked a free spirit. He looked like he was caressing the ball even when he lofted Dinda over mid wicket for six. It was more an On -Drive that sailed over the ropes, and into the stands. Mahela did look in top form in Pakistan, and he showed that if he looks to play the ball on it’s merit, instead of pre-determined shots, he could have a successful tournament.

A lot is at stake for these two

now more so than season one – the entire fiasco in Sri Lanka where the local media accused the two of choosing money over country, when they chose to be the public face of a collaborative voice which concerned all players, not just these two. It would be hugely embarrassing to be dropped from the IPL playing eleven after causing such a ruckus.

Sangakkara’s glove work has paid a heavy price since his decision to step down as keeper in the Test line up. He has not looked sharp as he once was. Chawla’s Googly deceived Gayle, and induced a nick, Sangakkara put it down. The dropped chance may well have cost Punjab the game. The equation for the D/L method would have drastically changed had Gayle been dismissed.