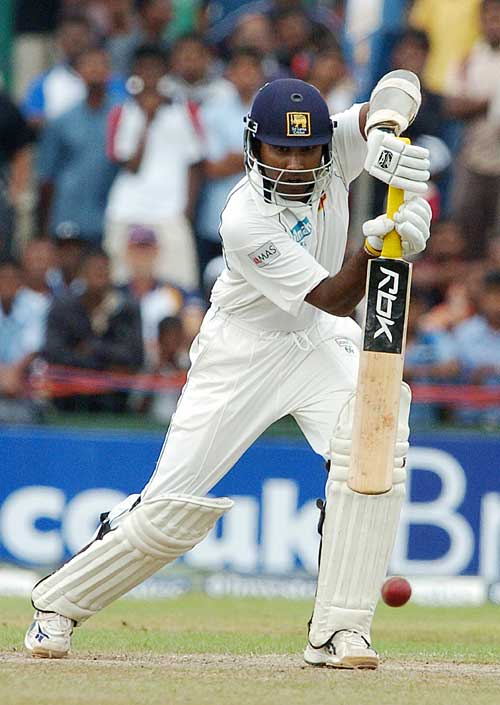 At the end of the second day’s play in the first Test match between Sri Lanka and India, The Lankans were 275/3. A lot rested on the shoulders of the former Sri Lankan skipper Mahela Jayawardena, who had just 36 runs to his name at the start of the third day.

By the end of day three Sri Lanka found themselves firmly in control of this Test match. Three sessions of play saw Mahela move from 35 runs to 204 not out, and Sri Lanka went from being 151 runs behind India’s first innings total of 426 to a lead of 169. Yet another day of Test Cricket which saw over 300 runs being scored.

Every time Prasanna Jayawardene played a rash shot, Mahela Jayawardene would walk to the middle of the pitch probably explaining to the wicketkeeper batsman the importance of his wicket as Sri Lanka looked to bat India out of the first Test in Ahmedabad.

The 33-year-old may have relinquished captaincy to concentrate on his batting, but the leader in him has been working overtime to communicate with inexperienced teammates to get the best out of them on tour.

R Kaushik writing for the Deccan Herald says that unlike Dilshan, Mahela doesn’t "believe in brutalising the bowling. Much like Rahul Dravid, the former Lankan captain grinds out opposition attacks with a single-mindedness of purpose and a grace that is all too unique to the sub-continent."

The master accumulator was at his industrious, imperious best at the Sardar Patel Gujarat stadium on Wednesday as Sri Lanka tightened the screws on the middle day of the first Test, putting themselves in a position from where they can realistically aim for their first Test triumph in India.

Sanjay Rajan reporting for Reuters points out that with Jayawardena’s sixth double century, he joins a select group of batsman to have scored six or more double centuries in Test Cricket.

Sri Lanka batsman Mahela Jayawardene became only the seventh batsman in test cricket to score six or more double hundreds when he made 204 not out against India in the first test on Wednesday.

England’s Walter Hammond (7) and Pakistan’s Javed Miandad and Sri Lanka’s Kumar Sangakkara and Marvan Atapattu (six each) were the other members of the select club.

Gary Kirsten (India’s coach) is rightfully irked. According to NDTV, Kirsten was upset at the manner in which his spinners bowled on day three. On a track where Murali looked ordinary, will Mishra and Singh look any different, I wonder? Not only have Sri Lanka better the Indians’ bowling performance, knocking them off for 426, but the Sri Lankan batsman have bettered the opposition by surpassing their total with the loss of just 5 wickets.  The game however is yet to be won.