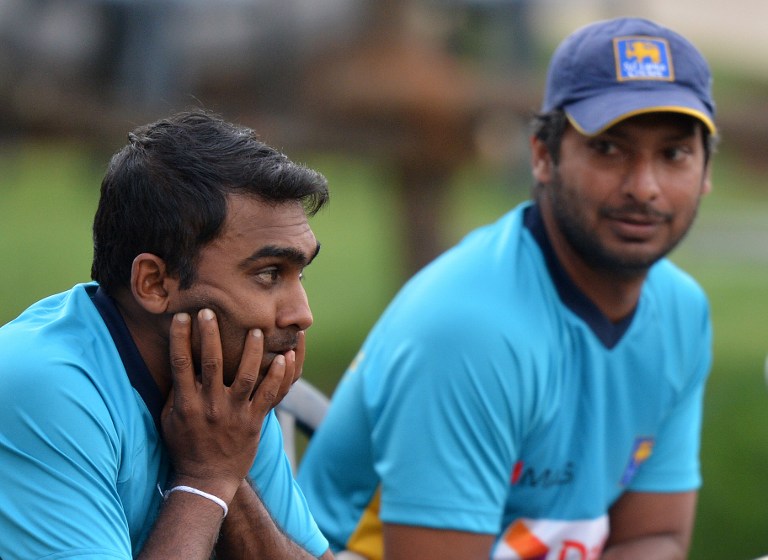 A ball that kicked off the surface, a simple catch to silly point, and Sangakkara was out for 59, ending the last collaboration in red ball cricket between Sri Lanka’s famous duo. Mahela followed a few balls later, also in the 50s, after an ambitious and unnecessary shot in the air. It was almost as if he missed his friend’s company.

Many pages have been written on this famous partnership, particularly in 2014, covering both on field and off field involvements. These have focused mainly on the similarities in their personalities and the parallels in their careers. But it got me thinking. Is it that clear cut? Warne and Mcgrath were as different in their off field personalities as night and day, Wasim and Waqar despised each other during their playing days, and the most prolific batting partnership of them all, Tendulkar and Dravid, had little in common apart from being nice guys with an insatiable appetite for runs. Are Mahela and Sanga so alike that they were meant to be? Could they really be cricket’s ultimate soulmates?

A closer look and a few differences start to emerge, with the first one appearing early on. In the mid 1990s, the schoolboy cricketers marked out for greatness were Mahela Jayawardena, Thilan Samaraweera and Avishka Gunawardena. Lacking Mahela’s natural talent, Samaraweera’s all round skills and Gunawardena’s explosive power, Sanga fell well under the radar.

Having carried his school form in to domestic cricket, Mahela was eased in to the team in 1997 in the lower middle order as a future replacement for the great Aravinda De Silva. His selection was welcomed as part of the policy of injecting young blood in to the national set up. Sanga was introduced as a wicketkeeper batsman in 2000, an immediate replacement for Romesh Kaluwitharana. Although past his prime, the latter’s popularity was intact as people fondly remembered the punishment meted out to tall Australian fast bowlers by the dark, diminutive batsman and his quips behind the stumps. Sanga hailed from a prestigious school, spoke polished English with a slight accent and was rather good looking. Girls warmed up to him, guys wanted a bit more of ‘Little Kalu’.

The perceptions of Mahela and Sanga upon their introduction to Test cricket were different as well. Sanga was seen, correctly at the time, as a batsman with a limited range of strokes, not dissimilar to Lahiru Thirimanne. Nimble feet, great hands and elegant drives made Mahela a more complete and attractive strokemaker. Local and foreign commentators raved about the new star on the horizon, while Sanga was noted more for his education and eloquence than his batting.

By around 2002, the perceptions had been solidified. It was said that Mahela was one of the best players of spin and had the talent to be successful all over the world while Sanga’s technique would help him score runs on bouncy wickets abroad. 12 years later, these reviews are as valid as they were then, even though the individual career records of the two hint otherwise. So what has led to Mahela not living up to his early promise, especially outside the subcontinent and Sanga surpassing expectations? The reasons, I believe, are twofold.

Firstly, for all his maturity and experience, Mahela is essentially the same batsman that burst on the scene in 1997. He has the same strengths mentioned above, but also the same weaknesses. Bouncy pitches have bothered him in test cricket, while the out of form Jayawardene is loose outside the off stump, especially in seaming and swinging conditions. He is prone to the occasional lapse in concentration, even when he is batting with divine beauty. Sanga, on the other hand, is arguably the most improved batsman of this century. The man who used to get starts only to throw it away with a rash shot, is now a run machine who would conceivably have broken Sachin Tendulkar’s record run tally if Sri Lanka played more Test matches a year.

Secondly, Sanga is the ultimate perfectionist and there are stories of him testing the patience of coaches with endless training sessions. He is an anomaly in a country unfamiliar with perfection. Numbers and records are important to him, and he seems disappointed by any score below 100. His father expects of him a career record matched only by Don Bradman and one suspects that Sanga might have hopes of being the only player in history with a career of at least 60 Tests to retire with a batting average over 60.

Probably with such a record in mind, he has developed a unique approach to Test match batting which was cleverly summed up by Mike Selvey recently when he wrote: "If there are batsmen who have elevated batting to an art form then Sangakkara comes at it instead as might a scientist, innings conceived not so much in the nets as in a laboratory." This meticulous process has allowed him to eliminate all risk from his batting, but it is a testament to his versatility that he has avoided becoming the Geoffery Boycott of his generation by producing several aggressive innings when the situation demanded.

Mahela, on the other hand, is an artist and artists are not concerned with perfection or numbers, but with beauty and style. In fact, it can be argued that many famous creations are valued for their imperfections as much as their precision. It seems cruel yet fitting, therefore, that he should become the only batsman in the 10,000 club with an average below 50, having missed the mark by 36 runs in the last innings to end up with 49.84. In his relatively carefree attitude to batting he is also much more Sri Lankan than his friend. More easily satisfied and less demanding of himself, he has let slip opportunities to build a more impressive record, particularly away from home.

When it comes to leadership and cricketing intelligence, both these greats have captained Sri Lanka with distinction. However, while Sanga led his team to the final of the 2009 World T20 and the 2011 World Cup, he lacked the tactical nous of Mahela, especially in tight situations. Mahela often managed to pull things back through imaginative field placements or gutsy rearguards, inspiring Sri Lanka to some memorable come from behind victories. A cool head and a calm personality also helped make him a great leader, as opposed to the often expressive captaincy of Sangakkara.

Finally, there are differences in their characters off the field. The general perception of the two is that Mahela is down to earth and humble while Sanga is faintly aloof. While that may not be wholly true, it is based in fact. There is an aura about Sanga these days, a confident coolness and a celebrity that transcends cricket. He is the brand ambassador for anything and everything, and appears more convincing in advertisements than many local actors. If Mahela ever possessed such an aura, he has shed it in return for approachability. Hence there is little doubt that Mahela is more loved by the common man than Sanga, but Sanga may be the more admired one. He is the only Sri Lankan capable of becoming the best in the world at anything after Muralidaran, and for that reason alone he holds a special place in the hearts and minds of the general public.

However at the end of the day, these differences are negligible next to the myriad similarities and parallels between the two. They have formed the most famous, wholesome and significant friendship in the history of cricket. The bond has been so absolute that they have used the differences between them to complement each other and shape the identity of Sri Lankan cricket for over a decade. Much of my cricket watching life has included Mahela and Sanga, and now I must resign myself to never seeing the artist and the scientist together in whites. It is one depressing thought.