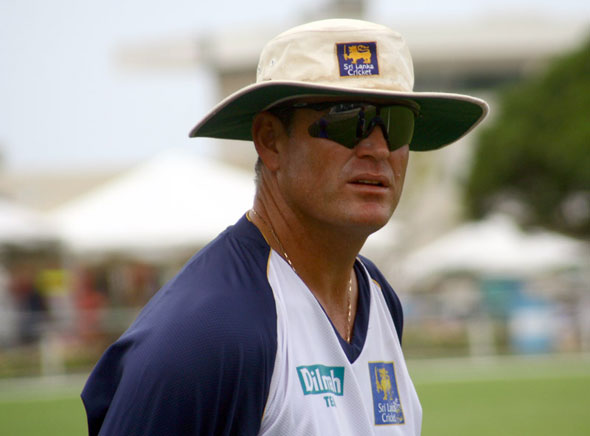 Sri Lanka was never Tom Moody’s first choice destination. It was only after loosing out to Greg Chappell for the job as coach of India that Moody decided to accept an offer from Sri Lanka.

It was the former coach of Worcestershire’s first engagement with an international cricket team.

With very little experience as an international coach, Moody was offered the job of head coach in 2005. His acceptance proved that he was satisfied with the remuneration on offer. But, one of the reasons he cited in private before leaving Sri Lanka to sign a deal with Western Australia was that he was dissatisfied with the pay. He also claimed that the travel and time away from family was taking it’s toll.

Upon quitting as coach of Western Australia, he blamed his departure on the demand of his increased business commitments and overseas duties. Is it not strange? He said he left Sri Lanka for Perth to be closer to home and his family, to cut out the ‘overseas duties’ and the travel associated with it.

Moody’s three years with Western Australia was disappointing to say the least and his stint with Punjab has been a disaster.

Western Australia lost six out of their ten games in the Sheffield Shield 2009/10, finished second last in the Ford Ranger Cup 2009/10 and lost three of their five games in the Twenty20 Big Bash 2009/10. After quitting Western Australia before being axed, Moody’s 2010 season with the IPL franchise, King’s XI Punjab, casts a shadow over his future as a coach.

Moody shouldn’t lose too much sleep over this because others before him too have had little success after Sri Lanka. If one recalls, Dyson was axed as the coach of West Indies and Whatmore’s involvement with Bangladesh was promising, but less than satisfactory.

Unlike it’s Asian neighbours, coaching Sri Lanka is not a nightmarish affair. The Sri Lankan administration and fans alike take the bad with the good.

The Sri Lankans’ performances on the field and the results they deliver from time to time can take an inexperienced coach to dizzy heights. How coaches lets it affect their egos determines how successful they are post-Sri Lanka.