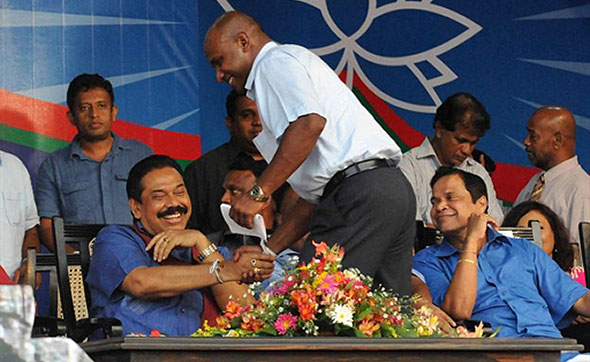 I found this article quietly hidden away (scroll down to the middle of the page) in this week’s The Nation newspaper. Although it doesn’t name names, it says a "senior cricketer turned politician is blaming the country’s top politicians for misleading him into believing that he would be selected for this month’s World Cup cricket tournament."

Sanath Jayasuriya is the only politician who is also a professional cricketer; Ranatunga has retired, which means they are talking about no one other than Jayasuriya

Here is the full article courtesy of The Nation,

A senior cricketer turned politician is blaming the country’s top politicians for misleading him into believing that he would be selected for this month’s World Cup cricket tournament. He has made several statements to this effect to his friends.

This one time cricket great has said that he had no intention of entering politics and had even ignored requests made by his parents who were traditional supporters of the opposition but dipped his hand into politics because of the promise. He has stated that politics has ruined his sports career and he despised it now.

Further, this cricketer has said that he was also hurt by objections made by some of his former colleagues for his inclusion in the team.

One of his friends whom this cricketer had confided said that although the cricketer had not shed a tear when his marriage broke down was now in tears over his exclusion from the team.

If any of it is true, then Jayasuriya has admitted to getting into politics only to play in the 2011 World Cup, which is what many of his critics have accused him of doing all along.