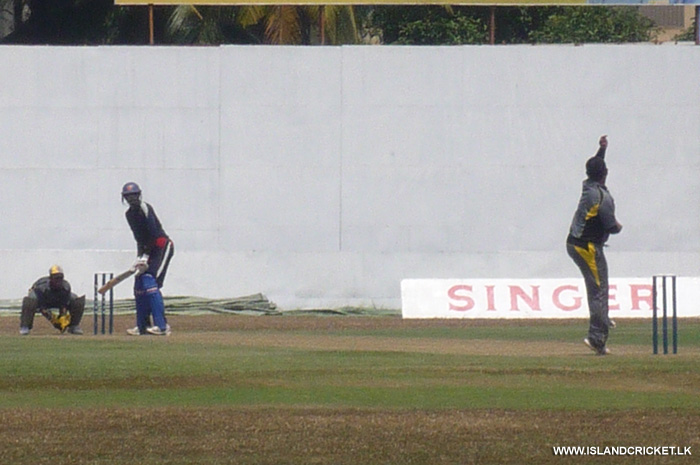 The Final of the 17th Singer-MCA Premier league knock out tournament was held at the P. Sara Oval, Colombo, yesterday.

Opting to field, Janashkthi restricted Unichela to an unimpressive 208 runs in under 48 overs. Isuru Udana had a fine spell with the ball, managing to capture early wickets. His prized scalp, however, was the wicket of Tillakaratne Dilshan for just 1 run. Former Sri Lankan Test opener Malinda Warnapura’s run drought seems to continue, he was out for 0.

Dashing opening batsman Mahela Udawatte who scored 144 last week end against John Keells, was not so lucky with the bat this week-end. However, Udawatte got 2 wickets for Unichela. Dilshan too made up for the low contribution with the bat, he took 3 wickets for just 35 runs.

Dunil Abeydeera and Gayan Wijekoon both got 2 wickets each.

It was Farveez Maharoof and Malin Silva that brought some respectability to Unichela’s total; Former NCC player and Captain of Unichela, Malin Silva, scored 47 valuable runs for his side and Farveez Maharoof repeated his recent batting success (playing for Sri Lanka A), by getting 62. Prasanna Jayawardene also chipped in with 31.

Although the Janashakthi side lacked big names, they were a team made up of many young guns and they fought well.

Even as Unichela defended a meagre total, the game ended with a thrilling and close win. Janakashthi eventually secured the win by just 2 wickets towards the end of the 47th over.

Perhaps the loss was taken badly by the Unichela team’s star players. My mole at the ground informed me that much to the disappointment of many spectators, who had gathered to see the match, the stars and big names (except for Malinda Warnapura) from Unichela failed to hang around for the presentation ceremony.

Best batsman of the tournament was Kaushal Silva who played for the Sampath Bank team.

Nuwan Perera from the Sampath bank was the best bowler of the tournament .

The Man of the Series award was taken by Dilshan’s brother, Janashakthi’s T.M. Sampath.

Isuru Udana’s 4 wickets and useful boundaries towards the end saw him collecting the Man of the Match award.