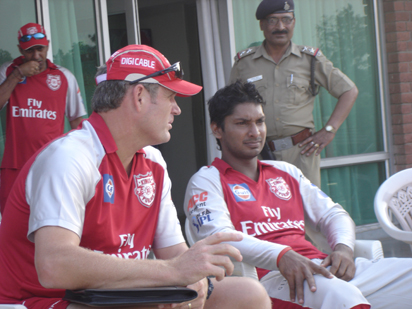 Kings XI Punjab have nine more games left at the DLF-Indian Premier League 2010 to go from the bottom of the points table into semi-final contention. They must win six games to even stand a chance, and with each loss the chances of making that semi-final appears distant for Sangakkara’s men.

At the same stage last season – under Yuvraj Singh – the Mohali team had secured three wins and lost two matches. This year they have managed just one win from five games. Kings XI Punjab (KEP) eventually finished the 2009 leg of the tournament with seven wins and seven losses, and finished fifth in the points table.

Under Sangakkara’s leadership they still stand a chance of equalling, or even bettering last year’s performance, but the manner in which they have been playing recently, it seems unlikely.

KEP is forking out $700,000/year on Sangakkara and $475,000/year on Jayawardene. Although it’s nowhere near the $925,000 they are paying for Irfan Pathan (I know! What were they thinking??) it’s still a pretty hefty price to pay for two key batsman in your side who have not had a significant impact in 2008, 2009, and now their final year with the franchise.

In 2009 Sangakkara averaged 30.18 and scored just two half centuries in 13 knocks. Jayawardene made one half century in ten knocks the same year. The inaugural year didn’t look any better. Jayawardene managed to score 179 runs in 12 innings (ave. 25.57) and Sangakkara finished with an average of 35.55. Now compare that with Shaun Marsh’s average of 68.44 and 616 runs in the same year!

It’s pretty clear that the two batsmen from Sri Lanka have failed at this whole Indian Premier League thing and they have all but nine games to prove their worth. On the line for the two is contracts for the next three years.

In 2008 the inaugural auction and contracts secured players for a term of three years. If Jayawardene and Sangakkara have nothing to show for in the last three years, it’s doubtful any franchise would want to bid on their services. Next season we are told that we will see a new auction and a total reshuffle. It’s somehow hard to see Tendulkar playing for any team other than Mumbai, so is it realistic to expect a free and fair auction then?

It would be ironic to see Sangakkara and Jayawardene pleading for more Test matches for Sri Lanka once the IPL no longer wants them. It was after all the duo who created a ruccus over representing Sri Lanka on a tour to England for a Test and ODI series in 2009. All because they wanted their large pay packets from Punjab.

Despite loosing four games and sitting at the bottom of the points table, and despite having the likes of Adrian Barath (who comes highly recommended by Brian Lara) sitting on the bench, Sangakkara says he wont be making any major changes.

Here is a quote from ESPNSTAR,

I think the personnel we have at the moment are good enough to do it as long as they keep preparing well, Sangakkara said.

But rather than just changing personnel we have a lot of thinking to do and we need to take a good look at ourselves and how we play the game.

We also have to ensure that everyone understands their responsibilities. We are still a very good team and we have a lot of excellent players in there, but we need to go out and win.

I still think we can go forward to the semi-finals.

There is one thing we know for sure. Despite all the fancy talk Sangakkara will not drop his pal Mahela Jayawardene. He hasn’t done it as captain of Sri Lanka when Jayawardena continued to fail in ODI cricket. With his comment above he has now made it clear that it wont happen at the IPL. However, unlike the one man selection panel (Ashantha De Mel) in Sri Lanka, the KEP franchise will not tolerate these failures for much longer in hope that they may come good some day.