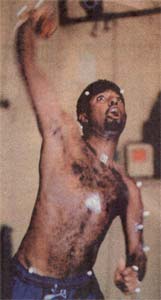 Between the 6th and the 9th of December 1992, I recall I had taken a few days off from school. I was "sick" down with the "flu". My appalling school attendance record operated according to Sri Lanka’s cricket calender. Nothing to be proud of, I know. But such was my love for this sport at the age of 12.

I stayed home to watch a little known Muttiah Muralitharan who was quickly drafted into the team due to an injury to Champaka Ramanayake. Sri Lanka was playing New Zealand in the second test match of a two test series at the SSC in December of 1992.

Foreign teams rarely toured Sri Lanka back in those days, Sri Lanka’s civil war had taken an ugly turn and suicide bombings by the Tamil Tigers was enough of a reason to fear travelling to the island. When Australia and New Zealand toured that year there was plenty of buzz amongst local cricket fans. Two of the best cricket teams would be gracing our island, and we had just uncovered two brilliant spinners in Jayananda Warnaweera (made his debut in ’89) and Muttiah Muralitharan. Both bowled fast off cutters that would grip, bite and spit off the wickets in Sri Lanka.

Warnaweera, however, had to end his career due to questions over his bowling action. With so much wrist involved in imparting spin there was an evident jerk during the release. It was considered a blatant chuck. That it was not. Waranweera’s action didn’t derive pace from a jerk in his elbow. He was bowling something that the world hadn’t seen and the pundits couldn’t grasp it for what it was. Raw, un-coached, and natural talent.

Muttiah Muralitharan, on the other hand, was a case entirely on it’s own. Although Martin Crowe’s New Zealanders had a lot to say, Warnaweera and Murali’s bowling action differed. The jerk in Murali’s action is as a result of a bent elbow which gives the impression of a throw. This is now an undisputed fact. He has been cleared in several tests by independent bodies.

This video here shows Murali bowling with an arm brace which prevented him from straightening his elbow.

Murali showed us that due to a congenital deformity of his elbow, his wrists have adapted in such a manner that he flicks the ball out. He is perhaps the only off spin bowler in the history of the game to be considered a wrist spinner.

Back in 1992, I jumped for joy as he cleaned up Martin Crowe for a duck. The Kiwi skipper was so distraught that he has made it his life long mission to eliminate unorthodoxy and natural flair in today’s game. He calls it an attack on the spirit of the game.

Despite scientific evidence and neutral bio-mechanic experts proving him wrong, Martin Crowe has spent the last several years trying to defame Murali by calling him a Chucker. It is perhaps is the reason why New Zealand have been struggling to compete at the international level. They have blokes so determined in trying to preserve their own interpretation of the sport that they squash anything that would in other parts of the world be considered a natural gift.

I have watched Murali bowl since the start of his career. The man would toss the ball up and just when the batsman thought he was close enough to drive, the ball would drop and dip. It was as if Murali had the ball on a string before the sharp spin kicked in. Murali could spin it at right angles. If the flight or variations in speed didn’t get you, then the sharp turn would. Batsmen struggled to cope with the big spinning off break. Forget driving the ball, it was hard not to induce an inside edge on to the pads. Back then the close in fielders – the likes of Hashan Tillakaratne – were just waiting to scoop anything up.

All of this, however, was way before the Doosra ever came about. Before the Doosra Murali would attack a channel wide outside off stump spinning it back in sharply into the right hander. It was lethal on any track in the world, but largely one dimensional. Yet, he would continue to keep taking bucket loads of wickets.

Arjuna Ranatunga would immediately go in for the kill, close in fielders were ready for the bat/pad chances.

An attacking mindset and a positive approach has always brought good results for Muralitharan, but it was largely thanks to Ranatunga and De Silva. In the 90s it all had very little to do with the new boy in the team, Muralitharan.

As the years rolled on and Murali rose up the seniority ladder within the national side, very few could dictate field placings to the champion bowler. It was now more or less his own call. It was blokes younger than Murali, the Sangakkaras and the Jayawardenes who turned to him in order to ask him where he would like the fielders placed.

Right throughout his career it has always appeared as though Muralitharan had a very negative mindset in his approach to bowling. Overhearing conversations on the stump microphone and subsequent comments made by former players has led me to believe that wickets come only after run rate for Murali.

Could it be? The great Murali is afraid of going for a few?

It is a well discussed topic amongst former players and current commentators. There have been questions asked of Murali when he has a sweeper cover fielder and the opposition are 90/6.

With the advent of the Doosra he has almost given up attempting to dismiss the batsman in the manner that a traditional off spinner would; the ball flighted outside off stump and going through the gap between the bat and pad.

Add Twenty20 cricket to the equation and Murali today is far more negative than he ever was.

This has indeed proven to be counter productive, Murali is going for more runs now – in ODI Cricket – than he did 10 years ago.

The batsman have figured it out that Murali only pitches his Doosra on middle and leg hoping to spin it across them. That would only mean that any ball outside off is an off spinner, coming back in, which makes him all the more predictable.

With the talent and ability he possesses,  it’s a shame that negativity has become the reason Murali has become so predictable.

One hopes that at the twilight of his career Murali would look back upon his youth, and look to what brought him fame and success. For a spinner of his calibre his fear of going for too many has only stalled his wicket taking ability.