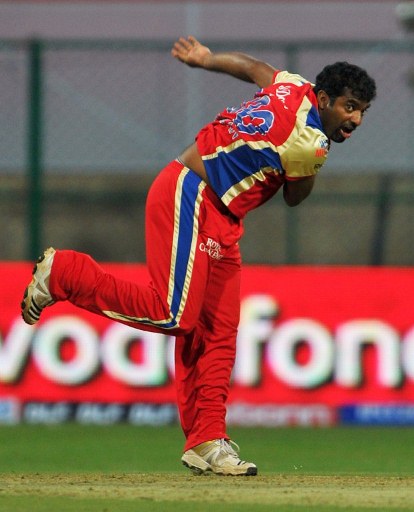 It’s that time of year again when cricket becomes tainted with MRF blips, bowlers who get ‘F’d ‘ (or DL-effed) and Lakshman Sivaramakrishnan and other assorted commentary embarrassments. This means that there will be something to watch and forget after work each day (much like pornography) on the TV.

The other day a friend of mine was asking which Sri Lankan players are playing in the IPL and for which teams. So for his benefit (and others’) here’s a summary of players on display, their respective teams and what to expect from them.

Nuwan Kulasekara and Suraj Randiv (Chennai Super Kings): Most of us will not probably know that either of these two play for CSK. After being benched so much that their bottoms start to hurt, we can expect these two to make brief appearances in the latter half of the tournament. Then, the average Sri Lankan fan will say: "Oh look, so Kule plays for the team in the Nestomalt-packet coloured outfit."

Kumar Sangakkara (Deccan Chargers) : Sangakkara will miss the first match in which Cameron White will lead the side to an embarrassing start. Sanga will return and play some stodgy innings, get starts and get out. Cameron White will continue to contribute to the opponents’ success, and at the end of the day the Chargers overseas skipper will have to give out more losing-captain speeches than he would have liked to.

Muttiah Muralitharan (Royal Challengers Bangalore) : With so many foreign players in RCB’s ranks, the Legend will probably not make every starting XI but will play a few games, bowling some good spells among a few expensive ones.

TM Dilshan (Royal Challengers Bangalore): Dilshan despite scoring some quick-fire useful knocks, as opener will always be in the shadow of Chris Gayle. Expect to see him get out bowled in the typical Dilshan fashion.

Mahela Jayawardena (Delhi Daredevils): Jayawardena will be all grace as usual, playing some breathtaking shots as well as getting out in bizarre fashion. He will live and die by that late-cut of his on the slow Indian pitches.

Lasith Malinga (Mumbai Indians): Mumbai Malinga (a.k.a IPL Lasith) will fire in yorker after yorker at the toes of both top class international batters and Indian rookies, leaving Sri Lankan fans wondering where the hell these yorkers were during the Asia Cup or the CB Series for that matter. In fairness to Malinga, I personally think his curls go much better with a lighter shade of blue as worn by the Mumbai Indians as opposed to the Sri Lankan team blue, and he might want to perform better when he feels he is better looking.

Thisara Perera (Mumbai Indians) : With the staggering number of foreign players in their squad, Mumbai are likely to misuse Perera, by sending him too low down the order and under-bowling him. That is if they manage to fit him in to one of the four overseas slots.

Dinesh Chandimal (Rajasthan Royals): Chandimal actually might get a few more opportunities, as Rajasthan aren’t overly packed with foreign players. He will be talked of highly among the commentators.

Angelo Matthews (Pune Warriors): The question is, will the injury-prone Matthews actually make an appearance for Pune? If he does, he will of course feature in their first-choice XI and will play a few decent knocks and bowl a tidy spell or two – given that he does not break down midway.