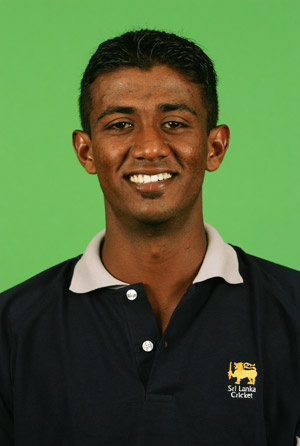 The Sri Lankan report card at the end of week-1 of the six week long 2010 Indian Premier League tournament.

By far the most successful Sri Lankan player at the end of week one. Mathews has performed with both bat and ball to help the Kolkata Knight Riders to some crucial wins early in the tournament. With 5 wickets in 3 matches at an average of 15.00 he is equal with Chaminda Vaas as the highest wicket taker in the competition. Mathews also averages 71.00 with the bat with a strike rate of 120.33 and has a highest score of 65 not out.

His 130 run fifth wicket partnership with Owais Shah in match one pulled KKR out of serious trouble and eventually put Kolkata into a position of strength.

Vaas was picked to play in the very first match of this season despite sitting out most of the 2009 IPL in South Africa. Although Vaas has not been Skipper Gilchrist’s first choice seamer, Vaas’ sensational performances has made it impossible to leave him out. He is the tournament’s Purple Cap holder (highest wicket taker).

In two games Vaas has picked up 5 wickets at a sensational average of 8.60. He is the only bowler to have two maiden overs under his belt in what’s considered a ‘batsman’s game’.

Despite being constantly overlooked due to lack of pace by the Sri Lankan national side and the Deccan Chargers franchise, Vaas has proven that swing, seam, slower balls and accuracy, with years of experience, can out do even the quickest bowlers on show.

The 40 year old veteran still sends the Indian crowds into a frenzy when he walks out to open batting with the little master, Sachin Tendulkar.

Jayasuriya has bettered the likes of Sangakkara, Dilshan and Jayawardena with the bat, but has disappointed. In two games he has managed to score just 30 runs. In his second match Jayasuriya was unlucky to be dismissed as a result of a sensational catch.

The versatile all-rounder has also picked up two wickets at an average of 18.00 making him more of an asset than the other specialist Sri Lankan batsman, who have thus far failed.

He continues to make a total mockery of Sri Lankan skipper Kumar Sangakkara and the Sri Lankan selectors.

Sachin Tendulkar and the Mumbai Indians have got the best out of Malinga whereas at the hands of Sri Lankan skipper Sangakkara, Malinga has looked to be a liability and an erratic bowler.

Unlike Sangakkara, Sachin provides Malinga the cover he needs to bowl his fast and furious yorkers from ball one. Sangakkara’s predominantly one-sided field placings have proven to be frustrating for the Slinga.

The Sri Lankan skipper could not ask for a worse start to his stint as skipper of Punjab.

Sangakkara’s side have lost the only two games they have played in and the skipper does not have much to show for with the bat either.

After scoring just 17 in his first game, Sangakkara pushed himself further down the order in the second game against Bangalore. Opting to send in Mahela Jayawardena and Irfan Pathan ahead of him.

Sangakkara has a batting average of 17.00 after his first two games, and the pressure is on. He also had a poor inter-provincial tournament in Sri Lanka prior to departing for the IPL.

Jayawardena showed glimpses of class during his whirlwind 13 ball 26 against Royal Challengers Bangalore. He looks to be in fine form but failed to deliver when Punjab needed him the most in their very first match. Jayawardene walked in with his side reeling at 44/3. Yet he went for a lavish off-drive and was caught behind off the very first ball.

Jayawardena averages just 26 runs after two games and just like his Sri Lankan team mate, Sangakkara, he has failed to impress early in the competition.

Maharoof has been himself; promising with the bat and a liability with the ball. He took Harbhajan Singh apart as he did Shane Warne in 2008 in a brief onslaught which saw Singh go for more than 16 runs in an over, but it wasn’t long lived and insufficient to make a difference to his side’s fortunes.

After three matches Maharoof averages 29.00 with the bat and has a highest score of 28.

Maharoof is equal with highest wicket taker in the competition with 5 wickets, but he is the most expensive bowler of the lot. He continues to leak runs with his back of a length bowling and his easy to pick slower balls. It appears though that without the ability to bowl a middle stump yorker, Mahroof may end the tournament as one of the most expensive bowlers.

All eyes have been on Dilshan since his phenomenal form in 2009. But the question on everyone’s lips these days is, "has the purple patch ended?"

Dilshan averages just 5.66 after 3 matches and is under a lot of pressure to perform going into the second week of the competition. With skipper Gambhir out with a hamstring injury, the Delhi batting will rely heavily on Dilshan, De Villiers and Sehwag.

There are no surprises when you look at Murali’s stats after his two matches this week. The champion bowler has 1/44 in 8 overs at an average of 44.00, but as he has done most of his career, Murali’s focus has been on his economy rate.

His economy rate is amongst the lowest in the competition, but one wonders if Chennai is satisfied forking out all that money for four economical overs.

Murali’s negativity is highlighted further when his team mate, the lesser known, Ravichandran Ashwin isn’t afraid to toss the ball up and vary his speed. Murali on the other hand has been spearing the ball in above 84 KM/H and bowling a leg stump line.

Murali just has to turn to his inexperienced off-spin partner from Tamil Nadu to figure out what he doing wrong.

Murali picked up 14 wickets in 13 games in 2009 for CSK. That’s less than a wicket every game. Unless Murali starts enticing the batsman to go for the big shot and begins to pick up more wickets, Chennai may opt to play an all-rounder who can handle the bat as opposed to a miserly Murali.

Sri Lankan fans were keen on seeing the hard hitting Perera play, but only four international players are permitted per side at the IPL. Therefore Perera is yet to make an appearance, but with Murali not spinning Chennai to victory and Dhoni ruled out due to injury, the hard hitting all rounder may just tip the scales over the economical off-spinner.

Ajantha Mendis, Dilhara Fernando and Thilan Thushara are yet to make an appearance.