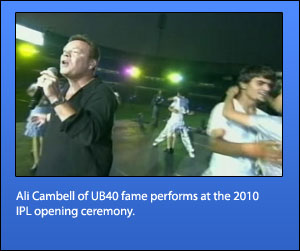 I am trying not to sound overly critical here, but honestly if I was Indian I would feel cheated. Some of you who witnessed the opening ceremony at the venue may have a different impression and perhaps would disagree with me, but the packed house at the venue cannot compare to the millions who were watching the opening ceremony of the 2010 Indian Premier League on TV.

How can you make such a mess of it when you have legends like Lionel Richie and Ali Campbell of UB40 fame performing?

Well, hand the most important part of your gig to a useless broadcaster and add terrible choreography to the mix. That’s how!

Audio is an important part of this broadcast, right? So when you can’t hear anything but an echo and music in the distance, is it not a big failure?

The man in charge of switching to different cameras made a mess of it as well. If you witnessed the opening ceremony of the 2010 Winter Olympics, then you know how important it is to view things from a wide angle perspective as opposed to a camera shoved in the face of the performers and dancers. The cameras were either too close at the IPL 3 opening ceremony, or too far. They struggled to find the perfect shot.

It appeared as though they forgot this was all happening outdoors. Why else would you want to project moving images on to a piece of fabric when there is wind involved? After the laser show at the 1996 World Cup opening ceremony, hasn’t India figured out that laser shows are really uncool when done outdoors? The ceremony also lacked continuity. In some cases several minutes passed before the next act.

Gosh, I could be wrong, but I bet the big name celebrities charged upwards of $20,000 for each song they performed. That gives you an idea of how expensive this entire thing would have been.

Ali Campbell opened with the Elvis classic ‘I Can’t help falling in love with you." Behind him on the stage were men and women who couldn’t dance to save their lives. It was like watching a Montessori dance recital. You know when you go to a young kids concert in pre-school and they try to dance in an orderly fashion, but they don’t?

Honestly, the whole ceremony was plagued with terrible choreography which left you with the impression that none of these performers and dancers had practised, or rehearsed for long enough. But it was great seeing Ali Cambell rocking again. It was also good to see the legendary Lionel Brockman Richie perform again. But man was it nice to see ABBA again after all these years. Was that really Agnetha Åse Fältskog?? Does she not age?? Or am I missing something here?? Was I duped with look alikes from a tribute band??

Thankfully though the brilliant cricket on show later in the night made up for it.