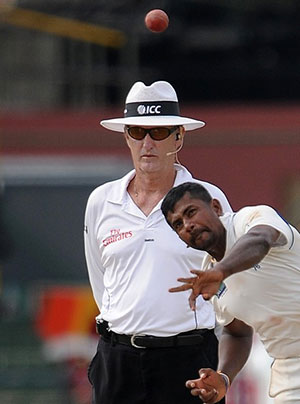 Sri Lanka’s series defeat in England earlier this year and losing the home series to Australia this month are as a result of embarrassing batting collapses. But the Sri Lankan captain Tillakaratne Dilshan feels that his side lacks the experience in the bowling department to win him matches.

The complaint after losing the first Test to Australia at Galle was the dusty wicket Jayananda Warnaweera had prepared, which the home board thought would trouble the visitors. But the Australians displayed that they had the goods to survive and even thrive on such wickets. As for Sri Lanka’s batsmen, they collapsed to an embarrassing 105 all out in their first innings, after which they were heckled by the international media for a plan that sensationally backfired on them. From that point onwards, they were trying hard not to lose the series – they were in damage control mode.

The batting collapse that led to the loss at Galle, cost Sri Lanka the series against Australia just as the sensational batting collapse in the first Test against England at Sophia Gardens in Cardiff, where Sri Lanka were shot out for 82 runs in their second innings, cost them that series.

Dilshan has now lost consecutive ODI and Test series on successive tours since taking up captaincy. He feels, however, that it’s not his batsmen that are the problem.

"We’ve gone 11 Tests without a win but we have lost only two Tests. The other nine were drawn,” he told journalist after losing the series to Australia. “After Murali’s retirement we are still trying to find a bowler to win matches for us.”

“These are hard times for Sri Lankan cricket,” he added.

“The bowlers we have are inexperienced. They have played just 5 to 10 Tests, and we have to persist with them for some time, and give them the experience before we can start winning again.

“If you take the last 10-15 years, it was Murali and Vaas who won Test matches for us. We need to groom bowlers who can at least get closer to that level.

“I am extremely happy that on this SSC wicket the young fast bowlers managed to dismiss a strong batting line-up for 316 and gave us an opportunity to press for a win.”

If you take anything from the above, take the last sentence and discard the rest. For it is understood by all that the Sri Lankan bowlers, considering the fact that they were constantly under pressure, due to their batsmen’s failures in recent times, have played their part. It is Dilshan and other senior batsmen who share much of the blame. After all, Rangana Herath finished as the highest wicket-taker of the series and Shaminda Eranga bagged five wickets in his very first Test.

Sri Lankan top-order batsmen were unable to convert decent starts into hundreds in the third Test at the SSC, on a wicket that was conducive to batting. And Angelo Mathews, along with the low-order, were faced with too much to do. Mathews has since been criticised for batting too slowly, and throwing the chance of a Sri Lankan victory away, while senior top-order batsmen fly under the radar.