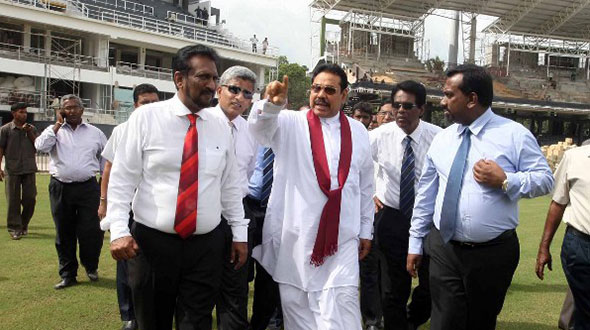 The financial crisis at the cricket board is likely to make this government more unpopular in the eyes of the masses. © AFP

It’s no secret that the 2011 World Cup hosted by Sri Lanka, India and Bangladesh has crippled Sri Lanka’s cricket board. The board was governed by an interim-committee set up by the government and controlled by Nishantha Ranatunga and Somachandra De Silva, who were both appointed with the blessings of the Sri Lankan president Mahinda Rajapaksa.

Being unable to stay within the budget for the World Cup, paying out large bonuses to officials after the event, development work remaining incomplete even on the day of the first match hosted in Sri Lanka and the handing out of tickets to politicians and others was never investigated, despite Sri Lanka Cricket (SLC) falling into millions in debt.

What resulted was SLC not paying cricketers for months, slashing the number of contracted players, not paying clubs and other associations and handing the maintenance of grounds to the military because SLC is broke.

In India, for lesser offences, several officials have been indicted,

As many as 525 tickets to the 2011 ICC World Cup final between India and Sri Lanka played at the Wankhede Stadium were unsold. This and other irregularities left the Mumbai Cricket Association (MCA) poorer by Rs2.64 crore, the four-member inquiry committee appointed by the MCA to probe the fiasco has found.

The panel … submitted its report to the MCA after a 10-month probe. The 24-page document … has indicted, among others, three senior MCA officials (one of whom still holds office).

But in Sri Lanka, no action has been taken to hold cricket board officials who were in charge at the time of the World Cup accountable. In fact, Nishantha Ranatunga has been allowed to contest in elections and allowed to win uncontested by the Sports Ministry and this government. He is currently the secretary of the executive committee.

The following is from The Sunday Island,

The Auditor General, in a damning report on SLC sent to the parliamentary watchdog committee COPE (Committee on Public Enterprises), revealed the irregularities regarding the issue of free tickets, though it didn’t identify various categories of recipients of complimentary tickets.

The loss of revenue from the handing out of the above-mentioned tickets, especially after SLC was left virtually bankrupt after the tournament, should be enough to ensure none of the officials who were responsible for this tragedy are allowed to set foot inside SLC offices in Colombo, instead, they are being protected by politicians in power and they continue to lead SLC down a path of irreversible destruction.

When there was talk in June 2011 that the ICC was going to probe allegations of corruption, this happened:

Earlier this month, faced with allegations that thousands of World Cup tickets were unaccounted for, Sri Lanka’s World Cup tournament director Suraj Dandeniya said that two hard drives containing crucial financial data related to World Cup ticket sales had been stolen from his offices. The police are probing the matter.

Suraj Dandeniya, like Nishantha Ranatunga, has connections to the Rajapaksa family. Strangely, both Suraj and Nishantha, have won elections to hold crucial positions in sports bodies. Dandeniya was elected uncontested for the top post in the Sri Lanka Badminton Association.