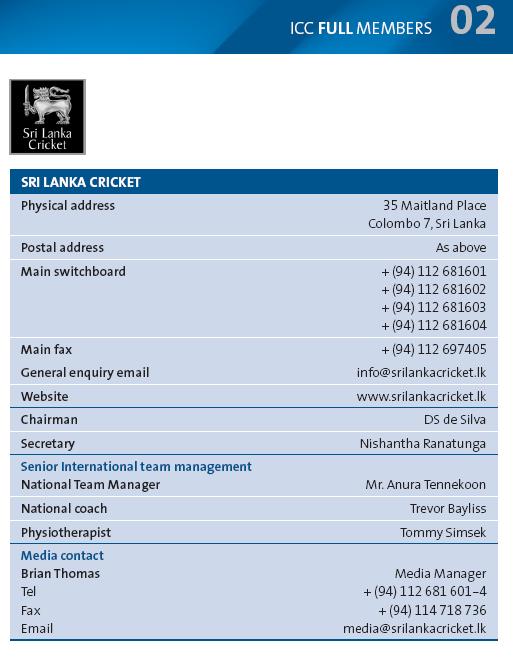 When the ICC released the ICC Playing Handbook 2010-11 ( you can download a copy here), it had incorrectly published Nishantha Ranatunga as the CEO of Sri Lanka Cricket. This prompted The Island newspaper in Sri Lanka to run an article titled: ‘Now, Nishantha takes ICC for a ride’.

In the article, the paper accused the current secretary of the interim committee, Nishantha Ranatunga, of hoodwinking the ICC into thinking that he was the CEO of Sri Lanka Cricket.

The paper pointed out that Ranatunga always took the place of Sri Lanka Cricket’s CEO at ICC meetings that were meant only for CEOs of member countries. It also accused Ranatunga of kicking out former CEO, Duleep Mendis, and replacing him with the current, largely ceremonial, Ajit Jayasekara.

This is further proof that Ranatunga, ever since being appointed as the Secretary of the Interim Committee, has been doing the groundwork to secure a permanent position at SLC and in doing so even a person of the caliber of Duleep Mendis was not spared.

Furthermore, we wonder as to why the other learned men at the Interim Committee have not objected for such a blatant lie to get published and put the entire cricketing world under total misconception.

Ranatunga has replied to the article on The Island, even posting his response on Sri Lanka Cricket’s official website.

In his response, Ranatunga said that it was not his doing, and that the ICC has acknowledged that it was their error.

Following is a an excerpt from Ranatunga’s reply,

It appears that through the publication of this statement, it is intended to show that I have misled the ICC by representing myself to be the CEO of SLC. I deny ever having done this and in fact it is the ICC which had made a mistake in naming me as the CEO of SLC. No sooner I read the article this morning than I sought a clarification from the Head of Media & Communications of the International Cricket Council Mr. Colin Gibson who has stated:

” I understand that there has been some issues with the local media .Let me apologize for the error in the playing Handbook .A simple but honest error was made by someone who is no longer with the company, He failed to double check titles and that has led to the this area I will ensure that the processes are improved as we go forward and that will seek to ensure that this sort error will not happen again. I have read the appalling article and we have told that this was nothing to do with you but an honest error in our office."

The ICC has since corrected the error and has replaced ‘CEO’ with ‘Secretary’ next to Ranatunga’s name, as is evident in the image on the right.

The Island’s criticism hasn’t gone down too well with the secretary who accuses them of character assassination, defamation and trying to bring Sri Lanka Cricket to disrepute. Ranatunga’s reply attempts to stoke our emotions by bringing up World Cup victories, the players and the current administration’s generosity, in a statement that appears to be written by a 15 year old; many grammatical errors.

He fails to explain why his name is even mentioned when all other member nations (except for India) have displayed their CEO or Chief executive’s contact details on this year’s playing handbook.

What role does our current CEO, Ajit Jayasekara, play?

Why does a financially struggling cricket administration have a CEO who serves no purpose? It is after all Ranatunga who attends all ICC meetings, and it is only Ranatunga who appears to call the shots?

In his reply, Ranatunga has neither denied taking the CEO’s place to fly overseas regularly for ICC meetings and other events, nor provided a reasonable explanation for why Duleep Mendis (during his time there) and Ajit Jayasekara appear to be ghosts at Maitland Place given their high ranking positions as CEO.