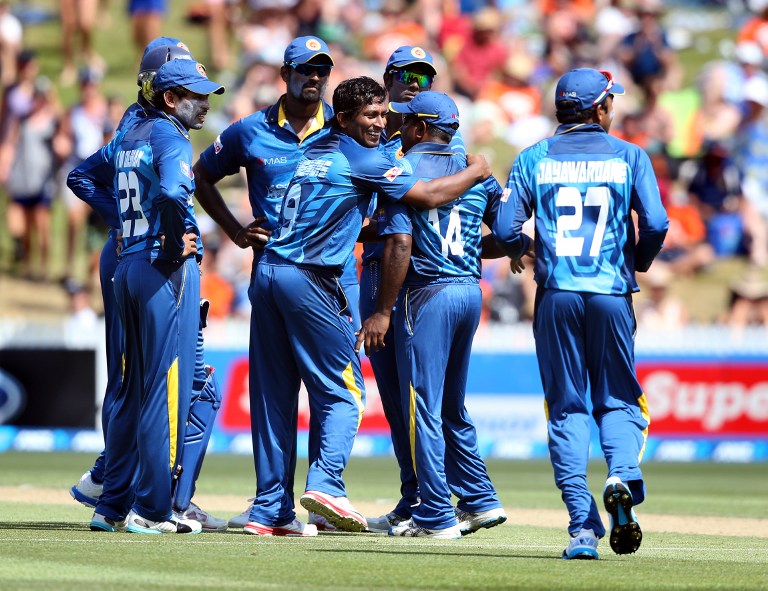 Panic is a strong word. And it may not have set in quite yet. But it is swirling around. © AFP PHOTO

New Zealand are 93 for 5. Sri Lanka are the opposition. It’s the 20th over. It’s a game being played at Dunedin. A ground where Sri Lanka will be playing again in another month’s time. In a World Cup.

NZ are 93/5. Sri Lankan fans get a glimpse of the possibilities that their team could deliver. In a tournament, which in many ways, is a bookend to the careers of many of their heroes. After the euphoria of the 2014 World T20 win, they see the chance to have them enter the pantheon of cricketing giants. The bowling that has sounded the sirens of despair, against a NZ batting line up in the form of their lives who've battered their side all tour, appears to be falling into place.  With SL 2-1 down in the ODI series, it is greatly encouraging to see them roar back into contention.

With this accelerated faith, the eternally optimistic amongst the fans begin to label Lahiru Thirimanne as the greatest captain in SL history. Thirimanne is captaining in Mathew's stead. And has figures of 2 for 17 having brought himself on. The collective nervous twitch of the fans that signifies dire need for one Lasith Malinga eases. At long last, the promised fusion before the big tournament is here.

There was paper. And there were many cracks. Both had come together in a horrific betrayal. Sleep walking tends to occur in the latter stages of sleep when there is the least amount of brain activity. For Sri Lanka’s bowlers this appears to strike, in more ways than one, in or around the 35th over mark. The bits and pieces cricketers who don’t belong in modern ODI cricket have been taken apart. There are no yokers or half decent death bowling. There are only boundaries. So many boundaries.

Sri Lanka are the most experienced squad going into the world cup in terms of the number of games played. But that experience is disproportionately spread amongst a few players. Most of who are better with the bat. It becomes quickly and desperately clear that any chance SL has now hinges on a bowler with one ankle. It is a curious tale of risk. Malinga may or may not play in the World Cup. And Even if he does there are questions over his match readiness. It is a lot of variables to pin your chances on. But one that SL must make given the listlessness of the other bowlers. Without the experience of Malinga to aid him at the other end, Kulesekara's dip in form is personified. Jeewan Mendis, Suranga Lakmal and Thisara Perera are completely outclassed when coming up against power hitters in the late overs. It is worrying yes, but it also seems cruel to the viewer.

When faced with these outlandish odds, fans invariably begin to develop this weird nature of pretending not to care while still harbouring some level of hope. Sri Lanka just needs a couple of hundreds in the top order and they could get close to have a go in the late overs. Right? Dimuth Karunaratne just needs to play a solid innings to help Dilshan out.

Karunaratne doesn't bat until number 9. In the next game he bats at number 5. Picked on the back of his test hundred in NZ, Karunaratne's inclusion in the squad was a surprise. He is certainly not the first player to be picked on form. However, now that Tilakeratne Dilshan has evolved into a civilised purveyor of runs rather than the see-ball-hit-ball variant he was before, partnering him with an accumulator seems counter intuitive. The problem is compounded when Karunaratne joins the family of accumulators that occupy the Sri Lankan middle order. Within the top ODI sides, Sri Lanka is arguably the only side without many (any?) power hitter in the middle order.

Dilshan, Sangakkara, Jayawardene are all class batsmen. But none of them are capable of bossing the opposition unless Sangakkara turns on mode 2.0 and Jayawardene has one of his silkier days. Much of the batting impetuous must come from the first set of power plays to allow Kumar and Mahela to play their game. If Dilshan doesn't do this anymore then the guy at the other end must. Karunaratne is not a man for this job. Even Sanath Jayasuriya who picked him admits it was a mistake. And shuffling him all over the batting order feels like the team are now unsure of what to do with him anymore. Kusal Perera looms in the shadows in the meantime. Inconsistent yet capable of the role that must be played.

Sri Lanka are losing. Jeevan Mendis comes in and is out for 18 and caps off a remarkably poor contribution to the game. The next game he scores 3. The very definition of a bits and pieces player, Mendis is another one of the odd choices in the squad that the team appears to want to justify by playing him regardless of performance. Such affections are not afforded to Dinesh Chandimal, who is drafted in sporadically and has to chase 360. He fails. Even when in the side no one seems to be quite sure where he should bat. He is Sri Lanka’s favourite lab rat.

Along with Angelo Mathews, Thisara Perera is the only claim SL has for a power hitter down the order. In 6 games in 2015 he has scored 7 runs. He has given away 287 at nearly 7 runs per over. Sri Lanka relies heavily on Perera for late order big runs at a clip. When he fails, the team is never in with a shout of advancing healthy runs made in the middle overs by the top order. And there is no one to back up chasing high run rates when he walks in and walks out within the space of 15 minutes.

Sri Lanka’s batting is meek, feeble and starting to look acutely incompetent. Their fielding seems to have succumbed to the relentless march of age. It however, should not be this insufficient for a side that once proclaimed themselves the best in Asia when it comes to this aspect of the game. The chances going down are beyond belief. Perhaps Sri Lanka’s fortunes expired at the end of last year. But it is more likely that these substandard performances were foretold when the squad was announced and when Malinga looked uncertain for the WC. The gaping holes in the Sri Lankan ODI side have never truly been addressed. The unraveling in this game could easily be superimposed onto any other game over the last 2 years. And more often than not the same issues surface. They’ve gotten away with it through performances from individuals without ever really undertaking any real solutions to the issues with their opener, with their death bowling sans Malinga and their lower order hitting and stability

Panic is a strong word. And it may not have set in quite yet. But it is swirling around the Sri Lankan team and is threatening to engulf them. They are a side with a few great batsmen and a few good bowlers but one that cannot seem to come together to deliver as a team. The only way forward is to play around the wonky selections they’ve made and play their 2 spinners and hope that Malinga can come back sooner rather than later.  Sri Lanka’s campaign once again will hinge on their super stars having exceptional games. It might sound cliché and a worn narrative but it is a reality that must be acknowledged.

As fans it’s a very tumultuous time. A world cup around the corner, with your team unraveling by the game. It is perhaps the equivalent of getting poisoned by the notorious South American dart frog. A lovely creature which produces a neurotoxin that shuts down your nervous system and renders you immobile giving on lookers the impression that you’ve died. But inside, you are still very much alive. Screaming. Very loudly.