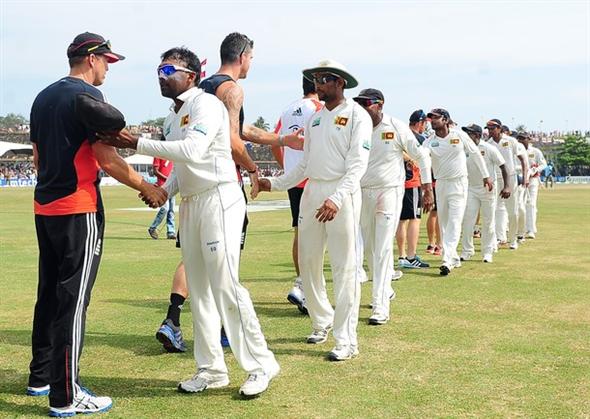 Both teams shake hands after the first Test at Galle. © AFP/LAKRUWAN WANNIARACHCHI

Sri Lanka made strides towards regaining their reputation as an unbeatable force in home conditions today with a hard fought victory over England. It is fitting that Sri Lanka start their post-Murali era winning-record from the ground where Murali ended his Test career in a truly legendary manner.

Going into the Galle Test, Sri Lanka were battling fatigue as much as any threat England posed. After tough tours to South Africa and Australia, and the short stop in Bangladesh, if Sri Lanka looked a bit rusty in home conditions it was very understandable. The batting certainly looked vulnerable in the first innings, which was exemplified by the shot Kumar Sangakkara played to a ball way outside the off stump.

It took a special innings from Mahela Jayawardene to take Sri Lanka out off a very difficult situation. As it turned out, that innings turned out to be the catalyst for the Lankan victory.

The batting unit relied heavily on the two Jayawardenes. Although the captain’s knock overshadowed Prasanna Jayawardena’s in the second innings, the gloveman’s innings was certainly a major contributing factor to the Lankan victory.

Young Dinesh Chandimal showed again that he is a talent that should be persisted with. He also showed his inexperience when he got out trying to force the ball into the outfield.

When England were winning comprehensively on home conditions, on their way to being the number one team in the world, many questioned if their ranking was a true reflection of their ability. Their accomplishments were on seamer-friendly conditions, which many in Asia believed was not enough to be the top team in the world. The English media, fans and ex-cricketers were quick to point out with gusto that this was a different team to those of the past, and they will prove that in their winter tours. Four Test matches into their away tours, they’ve lost all four matches they’ve played in spin friendly conditions. If they lose in Colombo, they will lose their number one ranking to South Africa.

Whatever happens in Colombo, England have lost their battle against spin convincingly. They will go back home to friendlier conditions and start winning again, and the media hype and bravado will start again until their next visit to Asia. I am sure lessons learnt will be forgotten.

At Galle, it was Rangana Herath – a true workman like spinner, who completely destroyed the England batting line up with nothing more that gentle spin and good line and length bowling. There is a lot to like about Herath’s bowling. Firstly, he uses all his experiences gained in his travels; he works on the batsmen’s patience while varying his speed and the angles. This wearing-down technique worked very well against English batsmen who are used to scoring quickly.

Herath’s partner in crime the tall Suraj Randiv has all the attributes to be a good spinner. Hopefully, he takes a page from Herath’s playbook and will be patient for his wickets. Randiv currently bowls too many balls either short or too full, looking for that special delivery that dismisses the batsmen.

It was no surprise that of England’s batsmen it was Jonathan Trott who was the most successful. Trott is a batsman who is unhurried. That is very evident from his demeanour at the crease.Trott plays the ball on its merits, he has no pre-conceived ideas about how to play the spinners. But above all, his main strength is his patience which is the key to playing in the sub-continent. Amidst all the theories, this is a secret England have not yet discovered and I think they never will.

This victory for Sri Lanka signifies what they must do to win at home. The strategy is very clear, victory must be achieved by a strong team effort with both the bat and the ball. Sri Lanka are far from being a top side in Tests. They have taken a step in the right direction, it’s up to the players and management to follow this path.