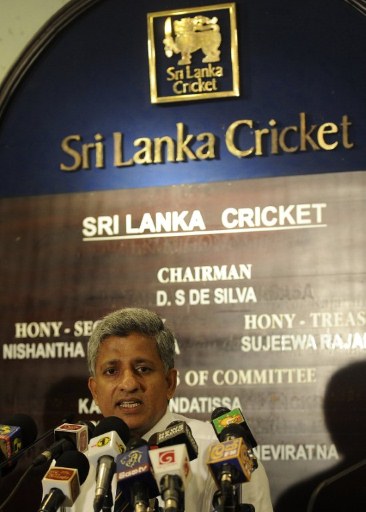 It has become quite fashionable these days to pin everything on the all powerful Board of Control for Cricket in India (BCCI). But let’s face it; the failure of the Sri Lanka Premier League (SLPL), which has been postponed less than two weeks before the start of the T20 tournament, was destined to fail.

Since the announcement in July last year, that Sri Lanka Cricket (SLC) had handed the tournament over to Somerset Entertainment Ventures (SEV), the Sri Lankan public, along with the local media, had no information about the tournament. As 2011 dawned, not even a website to promote the tournament had been created.

This, however, does take the cake:

“We don’t know who is organising it, we are yet to get formal papers about the event. We have only been reading about the SLPL in the newspapers, and about the fact that there are players from India who want to take part in it. Till date though, we haven’t received any official letter from the Sri Lankan board. There is no authentication about the tournament so far,” a top [BCCI] official said on the condition of anonymity.

The Indian official made the above comment last month. Are you surprised that even a month before the start of the tournament, SLC had not been keeping the all important BCCI in the loop? You shouldn’t be.

Today’s announcement that the SLPL, which was scheduled to start on July 19, had been postponed for next year comes after India’s refusal to allow its players to take part. But the reality is that the blame rests solely on the maladroit SLC.

Sri Lanka Cricket have signed a five year contract with Singapore based organization “Somerset Entertainment Ventures” to sponsor the Inter Provincial tournaments conducted by Sri Lanka Cricket. This include the Title Sponsorship of the tournaments, Team Sponsorship of the five Provincial Teams and the Champion Inter-Provincial T20 Team participating in the Champions League T20 Tournament (CLT 20).

The statement by SLC indicates that SEV are “sponsors” but sponsors are not the party with which international players sign contracts with, for a tournament owned and hosted by SLC. The BCCI says Indian players were required to sign contracts with SEV not SLC.

India is merely looking out for its players. They say that in the event that a dispute arises over the contract, a resolution with SEV – launched last year just prior to being awarded the tender for the tournament – will be “extremely contentious”.

Without Indian players to draw in Indian TV audiences there isn’t money to be made. The tournament now lacks what interested both SLC and SEV – the big bucks. This is perhaps why they have called the whole thing off.

The SLPL was destined to fail because, unlike India’s IPL, this tournament didn’t have the best interest of the nation’s young cricketers in mind, or the intention of developing our cricket. The government’s interim committee had hoped it would be a cash cow, which meant that very little thought was put into planning the event.

The men tasked with overseeing the organising of the SLPL – former chairman DS de Silva and former secretary Nishantha Ranatunga – are incapable of handling such a project. They have left SLC in an enormous financial crisis thanks to their bungling of the ICC Cricket World Cup 2011. SLC is $69 million in debt because de Silva and Ranatunga were unable to co-host the World Cup according to budget.

The government’s solution was to appoint a new interim committee with Upali Dharmadasa at the helm. The sports minister says elections will follow next year. The same kind of elections that saw Dharmadasa elected two weeks after the 1996 World Cup win. He paid off the clubs with vast sums of money for their vote and the clubs betrayed Ana Punchihewa, whose hard work as the president of the cricket board saw Sri Lanka develop rapidly, even winning a World Cup in his year at the helm. Don’t expect the promised elections, or the new interim committee, to bring in change or good governance.