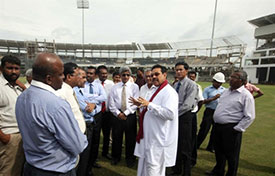 "Players are expected to follow a code of conduct. But is there one such for those who govern the game? Self-regulation is no longer a solution to corruption in cricket," writes cricket historian and writer Gideon Haigh on Cricinfo.

Haigh raises a valid point. Those we entrust with important tasks such as overlooking the renovation and construction of World Cup venues and the administration of Sri Lanka Cricket don’t seem to have to answer to anyone. In essence, they get away with anything.

So what does the ICC have to hand where enforcing any sort of minimally acceptable behaviour on its members is concerned? The answer is: not much. Bear in mind that it has taken a decade for the ICC’s member boards to recognise it as an appropriate forum for the policing of match-fixing, following the failure of their individual whitewashings. The only concerted attempt to get to the bottom of the activities of a member was the insertion of forensic accountants into the Augean stable of Zimbabwe Cricket, which three years ago cost Lorgat’s predecessor his job; around even the PCB in the last six months, the ICC has trodden warily, anxious not to look too doctrinaire.

There is, however, more and more reason for concern. In south Asia, where so much of cricket’s wealth is located, corruption is a daily, deep-rooted fact of life. On the annual corruption index published by Transparency International, an NGO, India (87th), Sri Lanka (91st), Bangladesh (134th) and Pakistan (143th) all rank in the bottom half of the table.

In Sri Lanka, the cricket administrators are under immense scrutiny by the media and the public. Their every statement about the progress of World Cup stadia, contradicted by the ICC. We are thankful, however, that the ICC remains truthful and honest at this time, exposing those trying to lie to the people of Sri Lanka.

Honest, hard working citizens of Sri Lanka do not get positions of authority within Sri Lanka Cricket (SLC). It is those well connected and used to plundering that get their foot in there. So just as those before them got away with gross mismanagement and theft, the current perpetrators, too, will worm their way out, only to be replaced by another similar group.

Capable of the instant constitution of a star chamber to punish Suraj Randiv for bowling a no-ball, Sri Lanka Cricket has somehow proven incapable of organising an election of office bearers since its so-called "interim committee" was appointed in March 2005, or of doing anything about last year’s allegations by former captain (and former ICC executive board member) Arjuna Ranatunga that "the money that comes from TV rights deals has gone into the pockets of some individuals".

At the end of this World Cup, if you love Sri Lanka cricket, you must urge change.

The time has come to give our players the best platform to perform and flourish. That is one thing regardless of ethnicity and political preferences that unites us – to see the Sri Lanka cricket team succeed. For too long have they been hindered by inefficient administrators looking to line their own pockets.

The fact that Sri Lanka will be going into the World Cup without the ability to get accustomed to pitches at the World Cup venues should stand as a reminder to all of us that the time for change is now and that those at Sri Lanka Cricket and the World Cup secretariat have betrayed us.