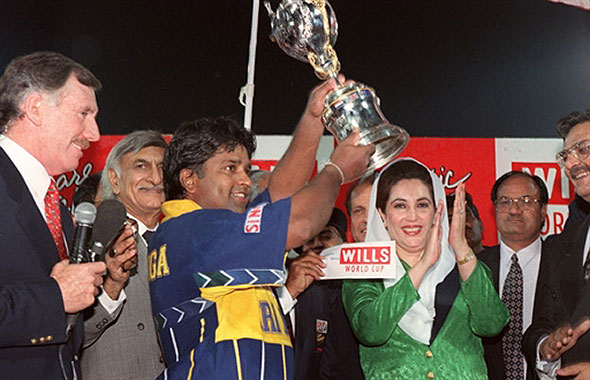 Forty years ago almost to the day, persistent showers frustrated everyone at the Melbourne Cricket Ground, where a Test match between England and Australia had lost its first three days of play to bad weather. Both sides then agreed to play a shorter version of the game – eight balls per over and forty overs per side.

What resulted was the first One Day International (ODI) match ever played. January 5, 2011 marks the 40th anniversary of ODI cricket. It is now the chosen format that decides cricket’s most coveted prize: The ICC Cricket World Cup.

The ODI game has seen numerous transformations over the years, but none more important that the one it took back in 1996. If Kerry Packer revolutionised the game in the ‘70s, introducing coloured clothing, matches played at night and the introduction of the white ball, the sport’s minnows at the time, Sri Lanka, re-branded it in 1996 for audiences of the next generation and beyond.

When the CWC was last hosted by the sub-continent, it was the year 1996. The year that saw Lisa Marie Presley file for divorce from Michael Jackson, David Boon retire, and Muralitharan no-balled by Ross Emerson while bowling leg breaks in an ODI against the West Indies in Australia.

At the time, Sri Lanka were a team with Bangladesh-like potential, but it’s safe to say that no one, barring patriotic fans from the emerald isle, expected them to win anything, let alone the tournament. It wasn’t just the fact that they won, either; it was how they went about it.

The tournament was marred with controversy when Australia and West Indies refused to tour the island for their group matches after the Tamil Tigers bombed the Central Bank building in Sri Lanka – 50 people died and more than 1500 suffered serious injuries. Understandably, the Aussies and the West Indians feared for their lives, which forced them to forfeit their matches in Sri Lanka.

It couldn’t have worked better for Sri Lanka’s cricketers. Thanks to the two forfeited matches, they had already qualified for the quarter-finals before playing a single match, and were just three wins away from the coveted trophy before even a ball was bowled in the tournament.

In their opening game, Sri Lanka restricted Zimbabwe to 228/6 in 50 overs. It may appear to be a low score according to today’s standards, but a run rate of 4.56 was an acceptable one at the time.

Out of the ordinary was Sri Lanka’s response. They reached their target in 37 overs at a run rate of 6.18, despite losing both their openers for cheap. The team strategy was to go for it right from the start, and if their dashing openers failed, others would continue with the onslaught.

That’s what really set Sri Lanka apart from the rest of the cricketing world that year. It wasn’t the fact that Sanath Jayasuriya was slamming everything around from the start – that had been done before. Sri Lanka revolutionised the ODI game by giving its entire top order the freedom to attack the new ball in the first 15 overs. 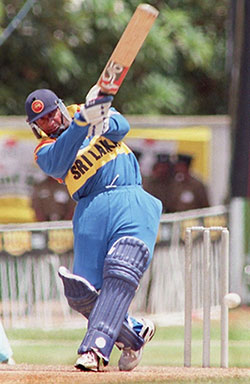 When teams were content scoring 60 runs against the moving new ball in the first 15, Sri Lanka targeted 100 and beyond. They surpassed 100 runs in the first 15 overs on three occasions in that tournament. England skipper Michael Atherton referred to it as “a spectacular way to fly” after Ranatunga’s men blew his side away during their quarter-final encounter in Faisalabad.

When Kaluwitharana and Jayasuriya failed, Aravinda de Silva and Asanka Gurussingha carried on the relentless attack, piling on pressure on the opposition’s bowlers. While many bowlers suffered at the hands of the Sri Lankans in that World Cup, none suffered a more horrible fate than India’s opening bowler Manoj Prabhakar.

Prabhakar was a key element in India’s Test and ODI side in the ‘90s – skilled enough to open batting with Sachin Tendulkar and open the bowling. He was fast creating a name for himself as one of India’s finest all-rounders of all-time until he found himself in the way of a rampaging Sri Lanka.

Prabhakar’s career ended at the Feroz Shah Kotla in Delhi on March 2, 1996 after Match-24 of the 1996 Wills World Cup. When it was all over, the Sri Lankan batsmen had plundered 47 runs in four overs off his bowling. The right arm fast-medium bowler even resorted to bowling off-spinners in hopes of salvaging some pride, but it was not meant to be; it was Sri Lanka’s time to shine.

Others suffered at the hands of the Sri Lankans, too. Australia’s Shane Warne finished the World Cup final wicket-less, and with the most expensive figures in the match (0/58 in 10 overs). Rajab Ali of Kenya was taken for 67 runs in his six overs in a group stage match – he was on track to concede more than 100 runs had he completed his quota. And how can we forget Phil DeFreitas? The English all-rounder was carted to all parts, and was taken out of the attack after just 3.4 overs – going at 10.36 runs per over.

Sri Lanka came two runs short of the 400 run mark when they made 398/5 in their 50 overs against Kenya in the 28th match of the tournament. Not until 2006, when Australia and South Africa met in Johannesburg did a team manage to better the ’96 World Champions’ effort and cross the 400 barrier.

When Ranatunga’s men met England in the first quarter-final of the tournament, the English had never been knocked out of the competition before the semi-final stage in all previous World Cups. A mind-numbing assault from Jayasuriya coupled with the brilliance of Sri Lanka’s middle order batsmen, saw them surpass England’s total of 235/8 with relative ease. It was the first time England had failed to qualify for a semi-final of a World Cup and the first time Sri Lanka had qualified for one.

As the New York Times put it,

On the field, as off, the championship made clear that England’s game has migrated, and metamorphosed decisively along the way. As if to underline the point, the English team departed the championship early, humiliated in a quarterfinal by Sri Lanka, a team that English overlords of the game kept out of top-level cricket until a few years ago.

The semi-final batting performance further showed the efficacy of Sri Lanka’s new strategy. India thought they had shot down the Jayasuriya-Kalu show, and with it Sri Lanka’s ability to attack with the bat. Enter Aravinda de Silva.

De Silva’s 47-ball 66 after Jayasuriya, Kaluwitharana and Gurusingha departed cheaply for 1, 0 and 1, was a counter-attack par excellence. It told the Indians that their work was far from done – this team wasn’t reliant on the heroics of just one or two individuals.

When De Silva finally fell, Sri Lanka was still in a precarious position at 85/4. But with skilled top-order batsmen, who were willing to slide down the depths of the middle to provide team Sri Lanka with stability in their batting order, they had experienced finishers who could take them to a score of relative safety when the top failed – in a conventional manner.

It wasn’t all just a slog-fest. Roshan Mahanama and Hashan Tillakaratne were top order batsmen for most of their careers. But they were willing to do what it takes to fit into the greater scheme of things. Along with skipper Ranatunga, Mahanama and Tillakaratne, and Vaas and Dharmasena down the order, Sri Lanka batted deep. Ranatunga was so confident that his side could chase down any score that pitch or atmospheric conditions were of no concern to him; if he won the toss, he was going to put the opposition into bat.

The final against Australia followed a similar script. With the early demise of Kaluwitharana and Jayasuriya, it was up to Gurusinhga and De Silva to counter-attack and score as many runs as possible in the first 15 overs. They did, and De Silva carried on, becoming only the third player to score a century in a World Cup final.

“For a country that until before the tournament was regarded as an international makeweight, victory completed a massive leap in status,” Adam Szreter wrote the following morning for the British newspaper, The Independent.

Although they co-hosted the tournament with India and Pakistan, the odds against Sri Lanka winning were as high as 33-1 a few months ago.

It was a victory for the attacking, imaginative cricket that marked Sri Lanka’s performances at every stage of the tournament.

Cricket changed that day. No longer was it acceptable to score at four runs an over until the shine wore off the new ball. Other teams had to adapt, giving birth to ferocious strikers opening the innings, when before, their services were only required for the final 10 overs.