As the Pakistan betting scandal is being exposed, it is alleged that a senior Sri Lankan player has brought the island’s most beloved sport to great disrepute. Join me as I dive into the facts and attempt to unravel the scandal.

When Mahela Jayawardene was appointed vice captain of the Sri Lankan team recently, we all wondered why? We asked why Dilshan was not considered for the position especially after he led the side to victory in Kumar Sangakkara’s absence during the triangular series in Zimbabwe this year; why appoint the former captain – who stepped down from his position – as vice captain, we asked.

The answer, rumour has it, is pretty simple. Skipper Sangakkara and the selectors just could not give Dilshan a position of authority given the events surrounding him.

Earlier this year, Brendon Kuruppu who served as team manager was replaced by Sri Lanka Cricket with Anura Tennakoon taking his position. Yesterday, it was revealed by the BBC that Kuruppu had sent the ICC a letter informing them of a Sri Lankan player’s meetings with an alleged illegal bookmaker.

"The unnamed cricketer has been seen with a suspected match fixer and was reported to the ICC by the team’s then manager, Brendon Kuruppu," the BBC reported.

"Kuruppu, who has since been replaced as team manager, was issued with a special recommendation by the ACSU appreciating his work," the BBC went on to state in its article.

The ACSU, or the Anti-Corruption and Security Unit is the ICC’s special unit that monitors corruption and cheating involved with match and spot fixing.

Secretary of Sri Lanka Cricket, Nishantha Ranatunga, has confirmed to the The Sunday Times in Sri Lanka that the police investigation into the player(s) involved is currently ongoing.

In June this year, under Dilshan’s watch, something serious transpired in Zimbabwe. So serious that the new team manager Tennakoon’s report after the end of the series was treated as ‘classified’ by Sri Lanka Cricket.

The mystery over treating the Zimbabwe tour manager’s report as classified information doesn’t encourage belief that the team is in an ideal state. Not making public the tour report of Manager Anura Tennekoon, the last pre-test era captain and one with old fashioned ideas on discipline and conduct, the grapevine says, is because it contains incriminating remarks on the bad conduct of a senior player.

Not only was the team manager’s report kept secret, but Chandika Hathurusingha was sacked after the tour and the public was given a lame explanation for it by Sri Lanka Cricket claiming that Hathuruisnghe disobeyed orders and left the team in the middle of a tournament to be with family ahead of flying to Australia for a coaching program. If SLC really objected to Hathurusingha’s departure midway through the tournament why did they facilitate his air ticket on such short notice?

Apart from the incident in Zimbabwe, reports are now surfacing that the ICC has been monitoring the activities of a senior Sri Lankan player.

The International Cricket Council’s anti-corruption unit has been monitoring the activities of a leading Sri Lanka player since the World Twenty20 in England last year after team-mates became increasingly unsettled by his late-night fraternising with a man they believed to be an illegal bookmaker. They passed on their concerns to the captain, Kumar Sangakkara, who followed ICC protocol by contacting the anti-corruption unit.

The player has since been investigated by Sri Lankan police, although no charges have been laid; officials from the ICC’s anti-corruption unit are said to be dismayed at the lack of progress.

The talk amongst veteran cricket pundits with connections to former national players and administrators in Colombo these days is that the player being investigated is none other than Tillakaratne Dilshan. But many doubt Dilshan would ever face any punishment for his actions considering the incompetence of our nation’s police force who are investigating the matter and the lack of solid evidence similar to The News of the World exposé where Scotland Yard was provided with video and audio evidence to nab the cheats.

More importantly, with the support of president Mahinda Rajapaksa – an ardent fan of Dilshan’s – the swashbuckling opener may never face justice for his alleged wrong doings, nor will a proper investigation take place; which Dilshan rightfully deserves to clear his name. That is Sri Lanka for you, cricket fans.

Interestingly, the match fixing allegations involving the Sri Lankan player has taken an interesting twist with sports agents having a go at each other.

The Island newspaper suggests the article on The Guardian, written by David Hopps is biased because it does not name another Sri Lankan player who is also under the ICC’s scanner. Sports agent and head of ESPN Cricinfo, Sri Lanka, Charlie Austin, who resides in Sri Lanka and manages several top Sri Lankan players is connected to the author of The Guardian article and The Island claims Hopps failed to mention a certain player due to his connections with Austin.

The Guardian report titled, ‘Sri Lanka player under ICC spotlight’, said that ICC Anti Corruption Unit had been monitoring the activities of a leading Sri Lankan player, but didn’t give any indications about a young Sri Lankan all-rounder managed by this agent, who is also under scrutiny.

Charlie Austin, a British National is the Sri Lankan head of a popular cricket website and manages several leading Sri Lankan cricketers, including the young all-rounder who’s believed to have come under the spotlight after patronizing a casino during the T-20 World Cup in England last year along with the leading player, mentioned in the report.

The Guardian report was written by cricket writer David Hopps, who is a business partner of Austin. Both are directors of Red Dot Tours, a travel agent company established in Sri Lanka.

Questions have been now asked whether the story was planted to expose the ‘leading Sri Lankan cricketer’ while safeguarding the all-rounder although both players are supposed to be under scrutiny according to a leading Sunday newspaper here.

The only all rounder who was present in England for the ICC World Twenty20 and under Austin is Angelo Mathews. 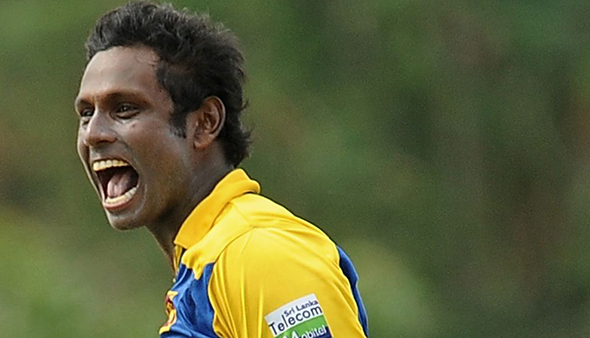 Focusing back to the incident in Zimbabwe, cricket writer Sa’adi Thawfeek wrote on his column this week that Sri Lanka Cricket’s attempt to sweep the incident under the carpet has made a mountain out of a molehill.

They have already made a mountain out of a molehill over the Zimbabwe issue. Instead of nipping it in the bud at that time, they tried to shove it under the carpet hoping it would go away, but now find themselves on a sticky wicket. By trying to cover up issues without taking the proper course of action on time they have allowed interested parties to cash in and blow the issues out of proportion for their advantage. This is something Sri Lanka Cricket has to take responsibility for.

The big question mark is whether the issues at hand are too big for the present administration to handle.

Knowing that the information has not leaked out via a source who is willing to be quoted by the media, Sri Lanka Cricket’s response to the numerous rumours surrounding the Zimbabwe tour has been weak. Instead of denying any wrongdoing, or initiating an inquiry, Sri Lanka Cricket said that it would not investigate what it claims are "baseless allegations".

It is with deep regret that we note certain media organizations have been misleading the public by accusing some of our players of misbehavior, during the recently concluded tour of Zimbabwe. As a responsible administrative body of Sri Lanka Cricket, we would like to state, that we do not take disciplinary action against players based on baseless allegations that are vindictive with an objective of character assassination of individuals.

Meanwhile, a source close to the team explained skipper Kumar Sangakkara’s stance on the whole matter.

Sangakkara is said to be frustrated and annoyed by the behaviour of the individuals responsible and the overall attitude of the interim committee. As a responsible role model Sangakkara wasted no time in reporting any illegal activity brought to his attention to the ICC but those in charge of Sri Lanka Cricket have taken a callous and dangerous option by attempting to conceal the wrong doings.