If you recall my first visit to the venue in late September (video) the maple leaf Cricket ground was nothing but a large open field – much has transpired since that visit. In under three weeks the organiser hired a Toronto based company to set up bleachers and stands necessary to accommodate a large audience. The temporary seating commonly known as bleachers were similar to that used in the Formula One Grand Prix in Canada.

The big screen at the venue also provided a nice addition and the fans caught a glimpse of replays and the live action.

The replays of the 3rd umpire referrals however needed more looking into. The replay appears on the giant screen prior to the 3rd umpire ruling, and as a result the players and the spectators were aware of the outcome before the ruling. 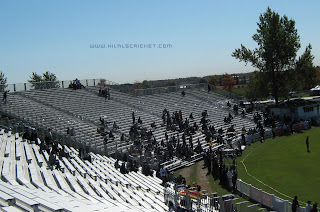 Tickets were priced at $35 on the first day of the tourney as opposed to the $40 general admission rates for the remainder of the tournament; even with Pakistan playing their first international match in months the turn out for the opening day was low. A sign perhaps of high priced tickets. One would know for certain on Saturday where the organisers expect a full house. The spectators found that parking was an extra $10 — travelling to King city via public transportation is not feasible. The car park is located on the premises it however is nothing but a muddy field. The images below show volunteers and event staff frantically digging out vehicles from the mud under foot — the driveway has no paving or tar and the there is just one gate which serves as an entrance and exit.

TIP: Parking at Seneca College which is a 5 minute walk costs a flat rate of $4.50 it is a secure environment with gated access. 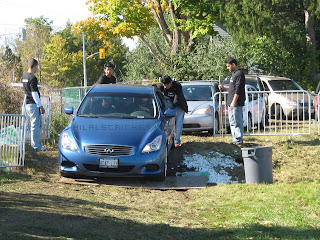 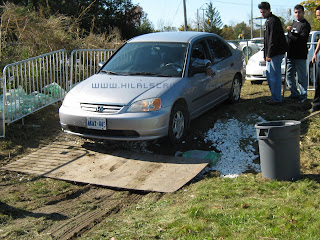 Ajantha Mendis eventually strolled out to collect his ‘Man of the Match’ award. 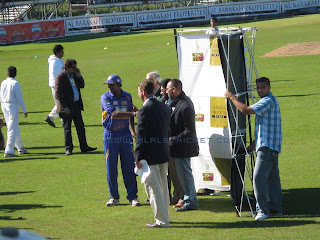 I visited Maple Leaf Cricket ground on the 9th to see what kind of progress had been made, what I witnessed there was the ugly.

Moments after my arrival I noticed a gathering of people arguing and screaming – profanity being hurled in all directions. I could not help but let curiosity get the better of me, upon questioning an onlooker it became evident that members of the organising committee were having a verbal showdown with a group of volunteers who were brought in as event staff.

"They (organisers) made us drive all the way from Oakville and wanted us to lend a hand as volunteers for tomorrow, after making us wait outside in the cold for 3 hours now they are refusing to give us passes and say they don’t need any more volunteers," claimed one of the ladies present.

"We have driven for hours to get here to help them — we have taken time out of our own jobs and school to be treated like this and now they have locked us out in the cold with no explanation" said another.

It appears that some members of the organising committee had invited interested parties to volunteer as event staff – a group of 20 individuals had been instructed to come to the venue. Once at the venue they had been instructed to wait for a prolonged period of time before being asked to exit the building with no further instructions – hours passed and eventually some could no longer take the bitter cold or the step brotherly treatment and decided to confront the organisers.

The organisers claim they had too many volunteers – when it takes 4 men to dig a car out of a muddy ditch wouldn’t you reckon 20 more volunteers who are willing to work for FREE would count as a blessing?