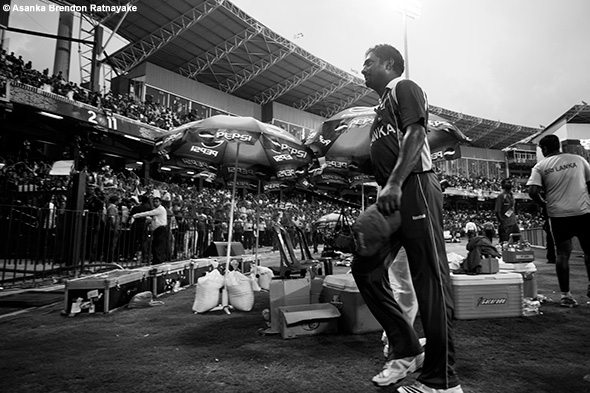 I recently came across a video from the 2011 Cricket World Cup semi-final between Sri Lanka and New Zealand, which was played at the R. Premadasa Stadium in Colombo on March 29, 2011. This game for me was incredible for a number of reasons, not just for the indescribable atmosphere, but it was also Muttiah Muralitharan’s last match for Sri Lanka on home soil.

Watching that footage again was surreal. It brought back many great memories. Before Muralitharan started his final over, TV commentator Nasser Hussain asked viewers, "Will he finish with a wicket?"

The question was almost posed in a tone that suggested Muralitharan would.

As a photographer, it’s these moments, these fairytale moments, that you love to capture and document; and not just for work-purposes, but rather to document those special iconic moments to look back upon years later and cherish.

I remember Muralitharan’s final over quite well, having being present to cover the game as a photographer. Muralitharan was turning it a mile, almost at right angles, and New Zealand couldn’t afford to lose another wicket. They opted to play it safe. Scott Styris and Jacob Oram tried their best to work him around for singles, taking a very defensive approach.

He bowled a delivery that we have seen so many times before, pitching well outside off stump, just short of a good length, leaving the batsmen in two minds whether to come forward or go back, and outskilled by a sharp, quick off-break. Styris was caught on the crease — out LBW!