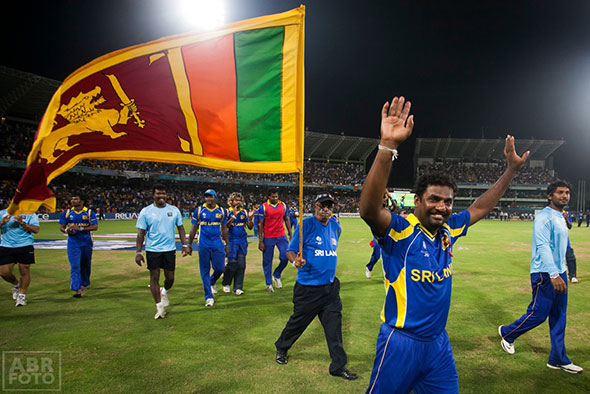 The crowd at the Premadasa was electric. The fireworks had already started going off even before Sri Lanka had won. Not only was this an ICC Cricket World Cup 2011 semi-final between Sri Lanka and New Zealand, it was also Muttiah Muralitharan’s final match on home soil.

Sri Lanka won. The legendary Muralitharan even took a wicket off his final delivery.

When the match ended, I walked back to where I had left my computer, and I was about to send off my photos to the agencies. That’s when I noticed that the Sri Lankan players had walked out of their dressing rooms. An impromptu lap of honour had begun.

It was Murali’s moment. He led the team around the field, and his team-mates obliged happily. Sri Lankan cheerleader Percy was right behind him waving the flag with vigour. It was a very special moment in Sri Lankan cricket history. For me, it was an honour to be on the ground capturing this momentous moment.

Only official ICC photographers were allowed on the playing area, all other accredited photographers had to stay outside the boundary line. However, due to the significance of the moment, a few local photographers crossed the boundary line and ran onto the field. The rest followed shortly after, myself included. We did get a few stern words from the ICC afterwards, but it was well worth it.