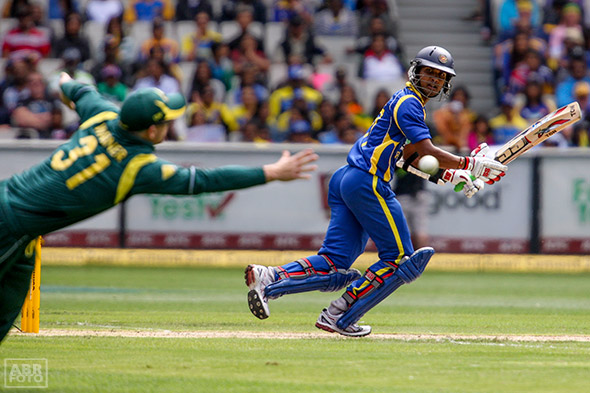 At the MCG, during the CB Series in Australia this year, Dinesh Chandimal was in fine form. At this stage in the tournament, Chandimal was leading the series run-tally with 306 runs at an average of 61.20. His innings prior to this, was 80 against Australia in Hobart to set up a remarkable record-chasing win, giving Sri Lankan one last-ditch attempt to make it the finals. Batting at the other end was Kumar Sangakarra.

I normally station myself at mid-off, however, Sangakarra was looking dangerous and I really wanted to get a good photo of him playing one of his majestic cover drives, so I moved myself over to mid-wicket. While Sangakarra was batting with his usual grace, the young Chandimal at the other end took a more aggressive approach albeit controlled; he was cutting, driving and pulling confidently.

This particular photo is a favourite of mine. The Australian captain Shane Watson had packed the offside field hoping Chandimal would play a misguided cut shot. David Warner was fielding at point, and while on 19 runs off 18 balls, Chandimal played an assertive cut shot past a diving Warner. You can view the shot here at 6.24 min: http://youtu.be/44V8ppMf4DA

It was another fine innings by Chandimal who finished with 75 off 84 balls.