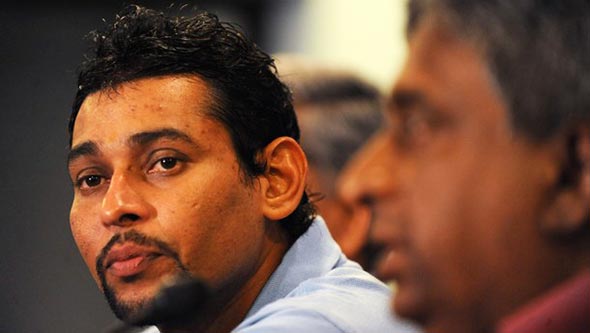 Sri Lanka’s new skipper Tillakaratne Dilshan wanted to leave the IPL early to prepare with his squad for the tour of England, but a deal between SLC and the BCCI allowed him more time at the IPL and less for Sri Lanka. AFP PHOTO/Ishara S.KODIKARA.

Tillakeratne Dilshan has made all the right moves since becoming captain. He’s set off on amicable terms with the board (or at least appeared to do so), embraced his new position without reservation, stashed away the earrings, and no longer looks like he shaves himself with a bear trap. The bad boy of Sri Lankan cricket appears to have shed the naughty persona and emerged with a sudden air of responsibility. At the rate he’s turned it around, he’s probably heading towards monkhood by the end of the month.

Best of all though, Dilshan has expressed fervently, and unrelentingly, his desire to put national commitments above all else. His eagerness to leave the IPL to fit in as many first-class games as possible before the England tour has shone in contrast to Lasith Malinga’s (albeit understandable) decision to do the opposite.

This is especially impressive considering the man that Dilshan is, or at least, used to be. Mere months ago, if fans were to pick a single Sri Lankan player who might shirk national duties for the sparkle of the IPL, most would almost certainly have voted Dilshan. Now, amazingly, he seems the only one who is keen to leave the glitter behind for England’s depression-inducing gloom.

Let’s also not forget that it was the 2009 incarnation of the IPL that effectively transformed Dilshan as a cricketer. Head-spinning paydays aside, there aren’t many players who have as much to be grateful to the IPL for. Still, he’s opted to ditch it earlier than he needed to.

Why then was there such a major administrative kerfuffle regarding his departure?

At first, it appeared as though he was set to leave in early May, until it was revealed that, in fact, it wasn’t really upto him. It was the boards’ decision, apparently. The SLC had signed an agreement with the BCCI regarding the involvement of their players in the IPL – the details of which still remain unclear.

This episode has raised questions. Why is there an agreement between the SLC and the BCCI regarding players’ availability in the IPL in the first place? The benefits to the BCCI from Sri Lankan players remaining in the IPL are clear, but not so for the SLC. What did the Sri Lankan Board have to gain from it?

But perhaps more importantly, why, in a lucrative league, that is supposed to be at the forefront of player empowerment, was the player’s wish for an early exit not immediately ratified?

It’s Dilshan who offers his services to the IPL franchise, and should he wish to withdraw from the league and take a paycut to pursue playing for and captaining his national team, he should not be held back by the BCCI, the SLC or anyone else, for that matter.

Fears about the astronomical wads of money involved in the IPL threatening cricket’s purest form have already begun to materialise, as Chris Gayle’s spat with the WICB has proven. Now, the shady deals between cricket boards seem to be another needle intent on unseaming the whites.

To SLC’s credit, they negotiated an early release for Dilshan in the end. But my point is that the decision should have been left to the player and him alone. A positive outcome shouldn’t smooth over a flawed system. In addition, five other Sri Lankan cricketers who haven’t played Tests for almost six months will go from the slap-happy Twenty20 format, on tracks so lifeless they remind you of Ricky Ponting’s face, to playing Test cricket in England in spring (which presents some of the toughest batting conditions in the world), with only one first class outing under their belt.

This problem must quickly be identified and nipped in the bud. If agreements drafted between boards can prevent players from being released to play (or adequately prepare) for their countries, Test cricket will inevitably suffer.

Without the class, skill and calibre cultivated in the Test arena, the IPL wouldn’t be half as attractive – particularly to those outside India. If players like Dilshan are eager to preserve it, the BCCI, SLC and whoever else should only be so happy to allow it without question. They owe Test cricket that much.