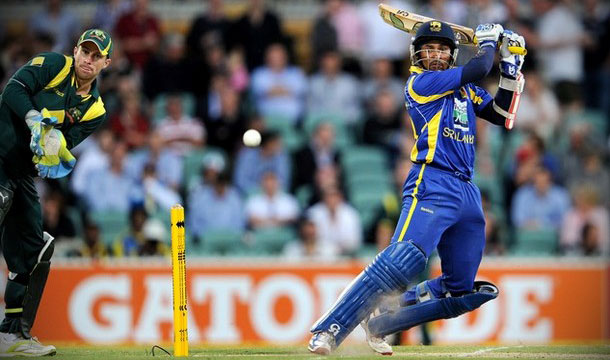 With the burden of captaincy off his shoulders, the Tillakaratne Dilshan of old is back with a bang
By Andrew Fernando | March 14, 2012

Tillakaratne Dilshan was named Man of the Series in the Commonwealth Bank Series. © AFP/William WEST

In mid-April last year, when the captaincy fell to Tillakaratne Dilshan, he trimmed his beard in the conventional fashion. What followed was something-of a reverse Samson effect. After having rocked the pedestrian-crossing look for years, Dilshan did away with the facial flamboyance, opting to retain those maturity-bestowing strips of chin hair. He rarely looked himself with the bat until he began to shave them again.

That Dilshan didn’t suit the captaincy is readily seen. Under him, Sri Lanka lost every Test series in a year of juicy international tours – the likes of which the side had long been clamouring for, having survived on unfulfilling forays with Bangladesh and meaningless encounters with India. His ODI captaincy record is even more apalling, given Sri Lanka’s recent prowess in the format. Virtually the same side that were runners-up in the World Cup, couldn’t lift an ODI trophy against top-flight opposition during his tenure.

But the captaincy was equally ill-suited to Dilshan.

Nothing quite characterises his game better than stirling results in the two tournaments immediately either side of his nine-month ebb as leader. In the World Cup, Dilshan was the most prolific run-getter, hitting 513 runs at a strike rate of 90.74 with more boundaries than anyone else in the tournament. After only three fifties and 440 runs to show for 21 one-day innings as captain, he repeated the feat in the Australian triangular – cashing in on a man-of-the-series award for 513 brisk runs.

It was as if he’d rediscovered himself. No longer having to weigh up restraint or responsibility against the daring that had confirmed him the successor to Sanath Jayasuriya, he could reclaim his free-spirited style. For months, it had been confused by notions of constructing measured innings to guide his side to a total, and risk-averse accumulation to prevent all-too regular collapses. The ploy led only to a string of soft dismissals and abysmal results. Dilshan had lost his identity along with the earring he no longer wore after he became captain.

Perhaps it was a predictable slump considering Dilshan’s history of needing to do it his way. For years he underachieved in the middle order, forced to shepherd the lower order and fulfil the role of finisher. Closing out innings requires batsmen to gauge conditions and weigh each risk carefully, picking their moments, conducting split-second cost-benefit analyses every time the ball leaves the bowler’s hand. That was not how Dilshan played. Blessed, or cursed with the outlook that every delivery could be a boundary ball, his intinct was unmistakably that of a modern day opener. At the top of the innings he pursues totals of 300 or 190 with near-identical gusto. With the field pulled in, almost every risk has potential for rich reward.

Even Dilshan’s most symbolic show of self-expression was hampered by responsibility. The dilscoop he’d pioneered, spawning swarms of imitators, appeared only briefly in a Twenty20 match against Australia in August, before being shelved following unsuccessful attempts to play the shot not long after. Perhaps a stroke as defiant of convention was deemed too brazen for a captain of Sri Lanka. In the second CB series final, not even a broken helmet and the most ringing-dose failure – the ball thundering into his grille – could prevent an unburdened Dilshan reprising the shot a few overs later. Second time around, he collected four.

Dilshan can hardly be blamed for being ill-qualified for a role that almost came to him by default. At the time, he just happened to be the only available player with enough experience to have a secure place in all three teams. The fact he’d shown little prowess in strategy, planning or man-management augured much, but amounted to little. Even worse, the knowledge there were two far better-equipped captains in the side in Kumar Sangakkara and Mahela Jayawardene, prevented Dilshan from truly owning the role like he did his post at backward point or his opener’s slot.

So shambolic was Sri Lanka’s administration following the post-World Cup en masse resignations, that had Angelo Mathews been fit for the tour of England, Dilshan may never have even been handed the reins. Despite the difficulties surrounding his appointment, that Dilshan flew to Colombo to accept the job and present a suddenly-scrupulous media persona, and then skipped the rest of the IPL tournament to prepare for the tour of England, showed that at least on some level he valued the honour and endeavoured to make the best of it. Perhaps amidst all that, he tried a little too hard. Thankfully for the team, and almost more so for the man, the only weight on his chest now is the collection of gold chains around his neck.

There is a picture making the rounds with Dilshan’s face superimposed onto the body of Captain Jack Sparrow. The pirate imagery fits him to the bone. Dilshan is not a collected, insightful leader of men. He’s the bandana-clad, hooligan biker you never want your daughter to bring home. Men of such adventure have rarely been born-leaders.