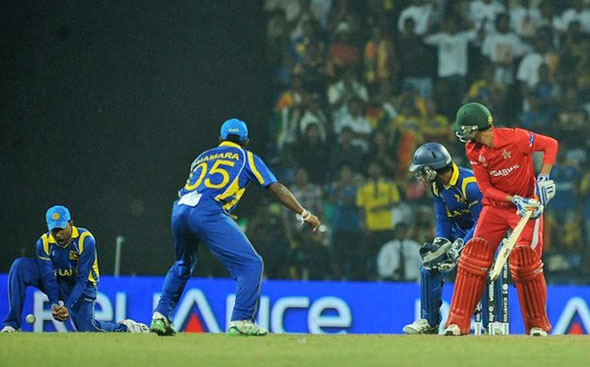 Mahela Jayawardene drops a catch from Zimbabwe’s Graeme Cremer at first slip off the bowling of Tillakaratne Dilshan during the Group A match in the ICC Cricket World Cup tournament between Sri Lanka and Zimbabwe at the Pallekele International Cricket Stadium on March 10, 2011. Dilshan picked up two wickets in the previous two deliveries and was unfortunately deprived of a World Cup hat-trick. Jayawardene pulled off a brilliant catch in the ball before to set up the hat-trick, but failed to hold on to a much simpler chance in the very next ball. AFP PHOTO/ Ishara S.KODIKARA.